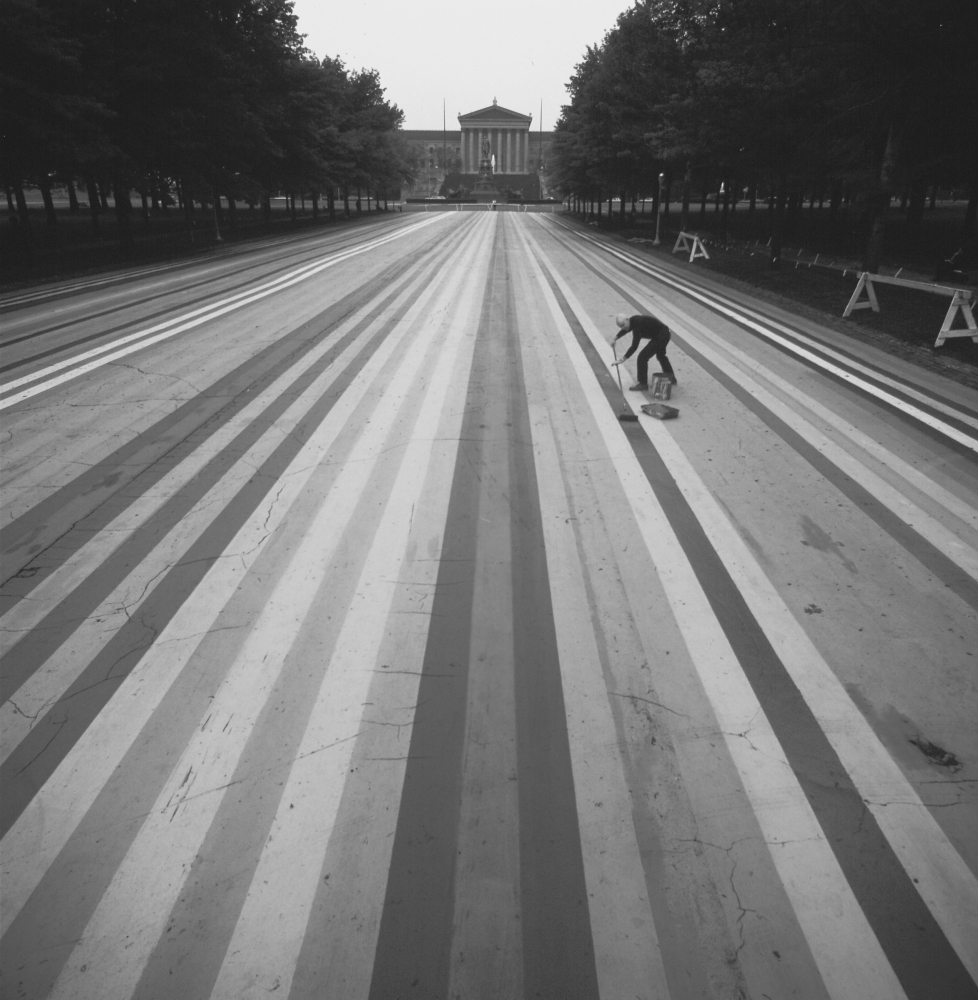 GENE DAVIS was born in 1920 in Washington, D.C., where he lived most of his life. After starting a career as a sportswriter and later becoming a political journalist in the 1940s; Davis began to paint in 1949. His first art studio was his apartment on Scott Circle and later he worked out of a studio on Pennsylvania Avenue.

Davis’s first solo exhibition of drawings was at the Dupont Theatre Gallery in 1952 and his first exhibition of paintings was at Catholic University in 1953. Though he worked in a variety of media and styles, Davis is best known for his acrylic paintings mostly on canvas of colorful vertical stripes, which he began to paint in 1958.

Davis began teaching in 1966 at the Corcoran School of Art, where he became a permanent member of the faculty. In 1974, Davis was awarded the John Simon Guggenheim Memorial Foundation Fellowship. In 1984, he was appointed the commissioner of the National Museum of American Art, Smithsonian Institution, Washington, D.C. 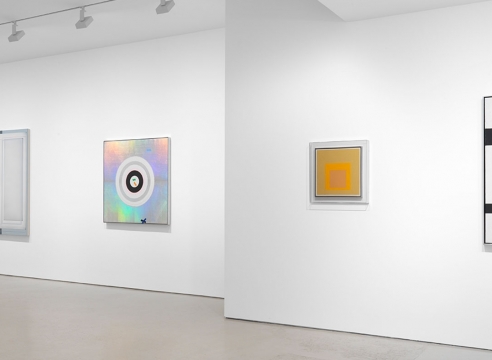 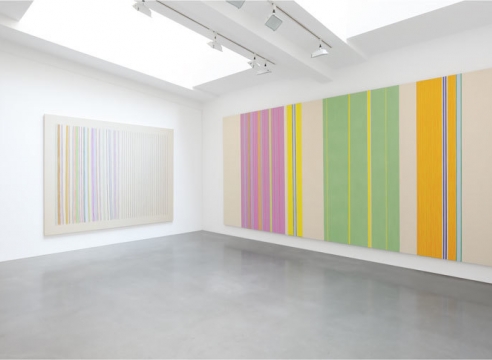 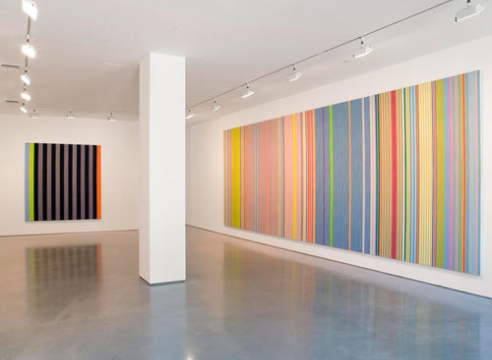 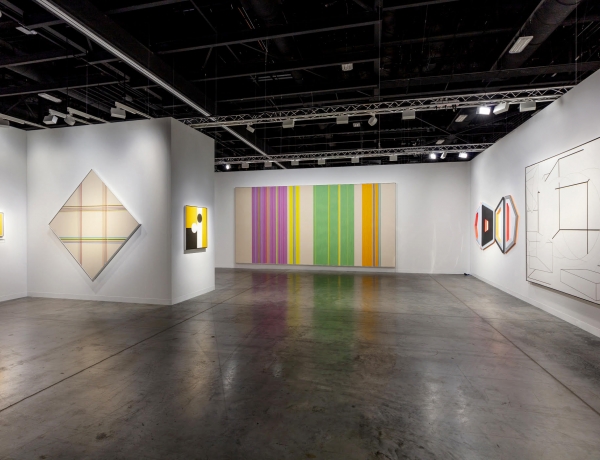 MILES MCENERY GALLERY is delighted to present “The Responsive Eye Revisited: Then, Now, and In-Between” at the 2019 edition of Art Basel Miami Beach. Previewing on 4 December, and opening to the public on 5 December, the fair will run through 8 December at the Miami Beach Convention Center in Miami Beach, Florida. The exhibition is accompanied by a fully illustrated publication, featuring an essay by David Pagel. Pagel is an art critic who writes regularly for the Los Angeles Times as well as a Professor of Art Theory at Claremont Graduate University and an adjunct curator at the Parrish Art Museum. 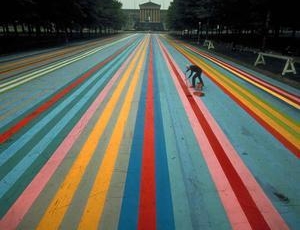 Smithsonian.com, The Painter Who Earned His Stripes

Gene Davis spent his career in newsrooms from the Washington Daily News to United Press International to the Fredericksburg Freelance Star, and even served a stint as a New York Times copy boy.

And while he took up abstract painting in the 1940s as a hobby, and was featured in a few local shows, he was never successful enough to devote his full time to art until, after 35 years in journalism, he finally turned to it 1968. 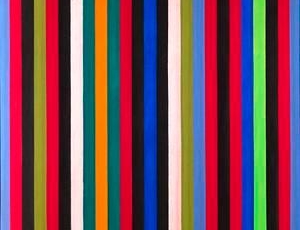 Brightly colored stripes multiply in rhythmic repetitions across the surface of a painting by Gene Davis. Remarkably original when they first appeared in the 1960s, these paintings became the signature expression for one of the leading Color Field painters. With no more than a rectangular canvas and multicolor stripes, Davis created a richly varied body of work that looks as fresh today as it did when it first was shown. The large size of most of his canvases from the 1960s requires a viewer to consider the relationships and rhythms over time, more like a musical composition than the dynamic, colorful, pop art images that emerged at the same time. 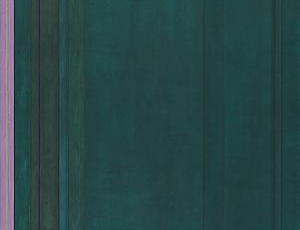 Made between 1961 and 1985, the eight enormous acrylic-on-canvas paintings by Gene Davis in this show - all composed of vertical bands and stripes - testify to the artist's devotion to color. "To understand what my painting is all about," Davis once said, "look at my painting in terms of individual colors...select[ing] a specific color such as yellow or a lime green, and take the time to see how it operates across the painting." When one looks at Yellow Jacket, 1969, one notices yellow used in a variety of ways: On the right, narrow vertical lines of yellow are tightly interspersed with orange lines; on the left, blue and pink stripes are sandwiched between relatively wide bands of lemon; and in roughly the center, medium-size gold stripes emerge from within a broad swath of lime green. The result is a dazzling irregularity - the yellow takes on a variety of qualities, multiple personalities. Larger, toneless vertical lines on either side contain the painting more or less in half. The work's eccentric yet reasoned structure, coupled with the colors' various tones and intensities, makes for an ingeniously polyphonic musical painting. 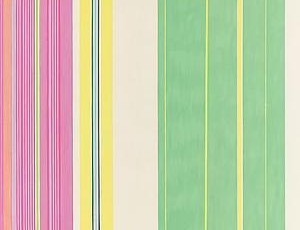 Look at the painting in terms of individual colors," said the Washington painter of vertical stripes, Gene Davis (1920-1985). "In other words, instead of simply glancing at the work, select a specific color such as yellow or a lime green, and take the time to see how it operates across the painting.... And then, you can understand what my painting is all about." Usually—at least with me—it's annoying for an artist to tell viewers how to look at his work. But with Mr. Davis, and this deliciously select show of a half-dozen large paintings from 1961 to 1980, the instructions are entirely tolerable. 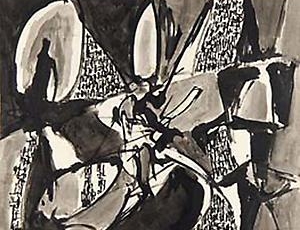 Abstract Drawings presents a selection of forty-six works on paper from the Smithsonian American Art Museum’s permanent collection that are rarely on public display. From simple sketches to highly finished compositions, these works represent the rich possibilities of abstraction as a mode of artistic expression.