NEW YORK, NEW YORK – AMERINGER | McENERY | YOHE is pleased to announce Speak, America, an exhibition of recent paintings by Guy Yanai. The exhibition will open 6 July and remain on view through 18 August 2017. A public reception for the artist will be held on 6 July from 6:00 to 8:00 PM.

“The cradle rocks above an abyss, and common sense tells us that our existence is but a brief crack of light between two eternities of darkness.”

Thus begins Vladimir Nabokov’s epic autobiography entitled Speak, Memory. In it the author grapples with emigration, displacement, language, the past, and this brief crack of light nestled within the darkness.

After Nabokov returned to Europe in 1961 (where he lived in the Montreux Palace in Switzerland until his death in 1977) he planned to write a sequel to his autobiography called Speak, America. This project was never realized.

This unrealized undertaking—along with Nabokov’s notion of “possessing the past” through memory—has greatly resonated with Yanai. In his second solo exhibition at Ameringer | McEnery | Yohe, Yanai gathers old and new memories. These remain thematically coherent through the artist’s use of fragmented horizontal brushed stripes, with vertical marks being a recent addition.

The origins of these paintings are exceedingly varied, their subjects drawn from an ever-expanding archive of photos sent by close friends, iPhone pictures, searched images, and other sources. Some images may lie around for a few years before Yanai decides to transform them into a work.

In Fox Hill Road (the street where the artist lived with his family from 1984 to 1989 after leaving Haifa), Yanai combines multiple shots sourced from Google Street View. Worcester, a town forty miles west of Boston, comes from a 2016 New York Times article describing the middle class dreams of the town in the 1950s. Los Angeles is a transcription of a small David Hockney watercolor from 1982, which has bedeviled and obsessed the artist for years. Paris (Rue de Normandie) is derived from an early morning view from the bedroom of the small Parisian apartment of Yanai’s girlfriend, while Brussels depicts a window in the Ixelles neighborhood, which he painted from memory upon his return from the city. The series of potted plants, seemingly detached from a location, are placed by their titles. Hero (For Marie Pierre Chauve) features a plant at the Hotel Regina in Cimiez, Nice—the same type of vegetation that was there when Henri Matisse was a guest. The work is named for the photographer of the source image, who sadly passed away months after taking the picture.

In keeping with a thread from the artist’s last show at the gallery, there is one “stacked” painting of seemingly unrelated images: End Of Europe (Siracusa). Placed one on top of the other, they evoke the speech of a child (“and then and then and then...”) yet harbor inarticulate complexities.

Speak, America aims to give visible form to three central pillars: experience, memory, and language. This unwritten book serves as a conduit for Yanai to weave in and out of the American psyche.

GUY YANAI (b. in 1977 in Haifa, Israel) attended Parsons School of Design, the New York Studio School, and the Pont- Aven School of Art. He received a BFA from Hampshire College in Amherst, MA. 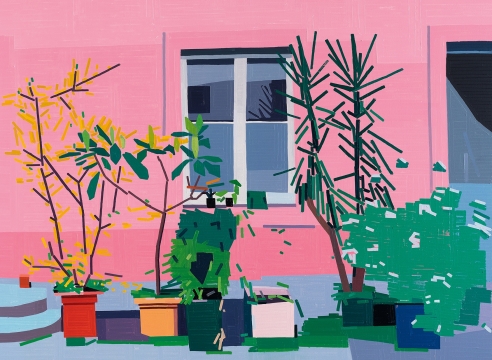