NEW YORK, NEW YORK – MILES McENERY GALLERY is pleased to announce its first exhibition of recent paintings by Inka Essenhigh. The exhibition will open 19 April and will remain on view through 25 May 2018. A public reception will be held for the artist on Thursday 19 April from 6 to 8pm. The exhibition is accompanied by a fully illustrated catalogue with essays by Phoebe Hoban and Rob Colvin.

Inka Essenhigh’s illusionary works are suspended somewhere between dreams and reality. The subjects swirl, slither, and ooze through space, creating mythically ambiguous and at times cartoonish figures that evoke a joyous mood of childlike fantasy. These animated characters inhabit strange, uncanny places—glimmering with an otherworldly sheen on the sleek surfaces of Essenhigh’s canvases.

Essenhigh began her investigation of imaginative work in the early 1990s and continues this exploration in her new series. After gaining notoriety for her use of enamel, a high-gloss paint often applied to house exteriors, she shifted her focus to oil in 2001, in order to experiment with a more traditional artistic method. Over fifteen years later, she has returned to her original medium, which recalls the rhythmic chaos of Jackson Pollock’s drip paintings: the long, liquid lines and figurative blobs evolving into anthropomorphic trees, flowers or people.

All aspects of Essenhigh’s works are alive and conscious in their own world, personifying substances such as light and nature to interact with figures in space. In creating these dynamic works, the artist begins from a place seen or felt in her mind. She allows the feeling to guide her, following perceived lines of energy to shape her contorted figures. Every now and then a familiar detail peeks through, such as a compact mirror, flying pigeon, or rosebud, grounding these whimsical visions in the reality from which they sprang.

In 2018, she will complete a mural for The Drawing Center, New York, NY, and her work will be featured in a solo exhibition at the Virginia Museum of Contemporary Art, Virginia Beach, VA. 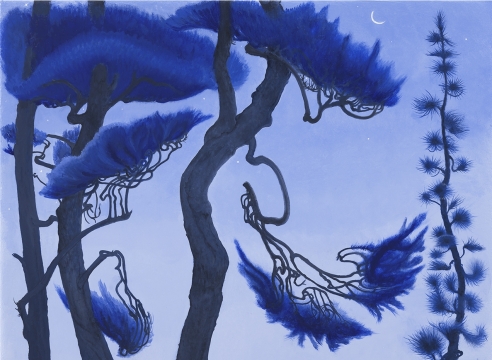 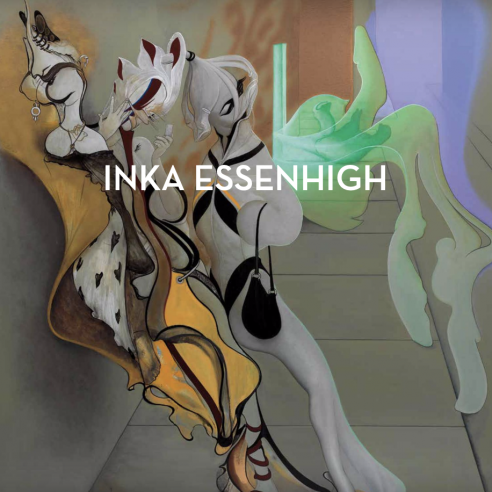 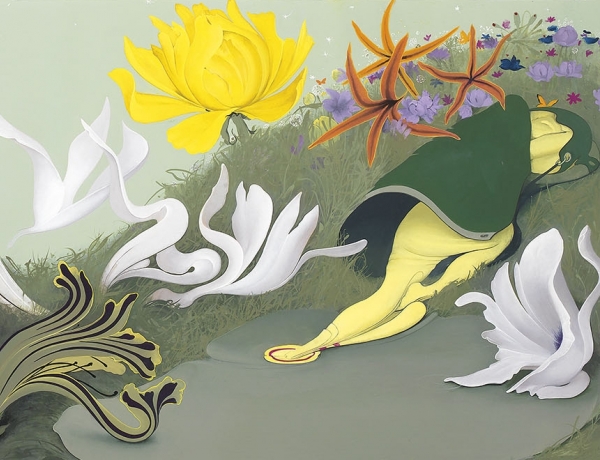 When I come across a work of art as weird and seductive and startlingly beautiful as an Inka Essenhigh painting, I haven’t the faintest desire to engage in my critical faculties. I just want to be overcome by the supple, erotic strangeness of her surrealist narratives; the chitinous sheen of her works’ surfaces; her Prada-meets-Star Trek palette; and the gelatinous, ectomorphic figures. You want to dissolve into an Essenhigh painting, in the same way that she dissolves virtually all solidity within her forms and spaces. Every body, every thing looks as though it’s made of melted caramel, or flowing silk, or liquid latex suspended midair, or some sinuous, alien protein. 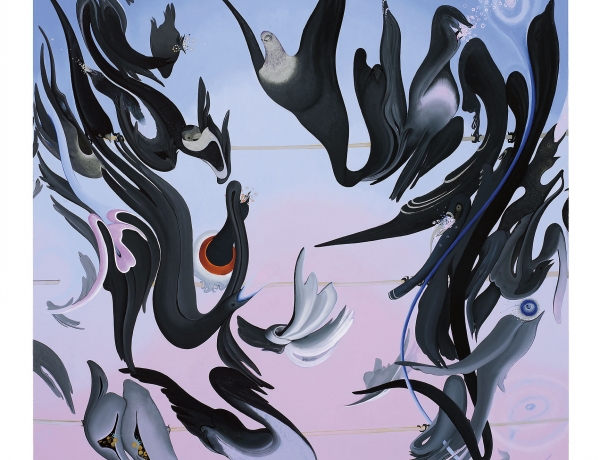 Essenhigh reveals a freedom that resonates with all manner of fusion: of figure and design, of abstraction and narrative, of sentiment and humor, and more generally, of ambitious painting with a readable narrative. 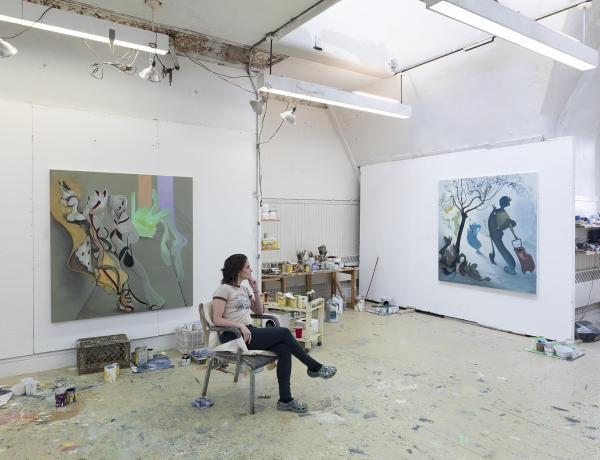 Inka Essenhigh's paintings, which combine twisted narratives, liquid line work, and oneiric imagery, are at once otherworldly and rooted in specific times and places. This season, that dissonance will be on display in a trio of new projects. This month, the artist’s surreal landscapes and fever-dream interiors will occupy the Virginia Museum of Contemporary Art. In April, New York’s Drawing Center will present Manhattanhenge, a site-specific mural for the Soho building’s stairwell. And later that month, she’ll open her first solo show with Miles McEnery Gallery in Chelsea.