NEW YORK – MILES MCENERY GALLERY is pleased to present an inaugural solo exhibition of new paintings by Tomory Dodge. A public reception will be held for the artist on 18 April from 6:00 to 8:00 p.m. at 525 West 22nd Street, and the exhibition will be on view 18 April through 24 May. It is accompanied by a fully illustrated publication featuring an essay by Christopher Miles.

Tomory Dodge’s new paintings are dynamic, liminal, and constantly in flux. In this new body of work, Dodge continues to explore concepts of transition by continuously building, destroying, and transforming layers of thick oil paint with fluid brushstrokes. His works depict irregular shapes and clashing planes that coalesce into compositions of organized chaos, challenging viewers to reflect on the process and meaning of picture-making.

The paintings on view show the making of a painting, its transformations, discoveries, and ultimately its arrival. Emphasizing on the idea that painting has somewhere to go in the modern world, just like it did before, Dodge approaches each work with an open mind. First, he sees the paint itself, its application, texture, color, and thickness. Second, he observes the representations–abstract and figurative–that the paint naturally makes. Through a process of experimentation and transformation, the artist’s practice consists of finding the painting within a painting by creating a large composition of smaller paintings all together.

Dodge’s process contains duality that is instinctual yet focused on the physicality of paint and the process of painting. Using non- deciphering titles, he creates opportunities to experiment in numerous ways, including negative and positive space, and pattern. In one single image, the artist calls into question boundaries, fluidity of content and content’s inseparability from form. As Christopher Miles says, “For Dodge, painting is a place where all of the stars in you and me can’t be accounted for numerically or pictorially, but where the feeling and the thought that go with those words can be found, right where the artist found it. Dodge’s paintings are caught in the act, by their maker and their viewers.”

Christopher Miles also notes, “Dodge’s paintings establish agency–made by the artist launching into and working through puzzles, fine messes, and maybe even occasional quagmires to world-build within the universe of the canvas, and to propose painting that is informed, astute, imaginative, and alive.” 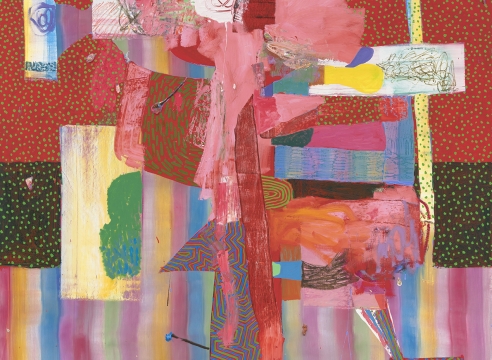