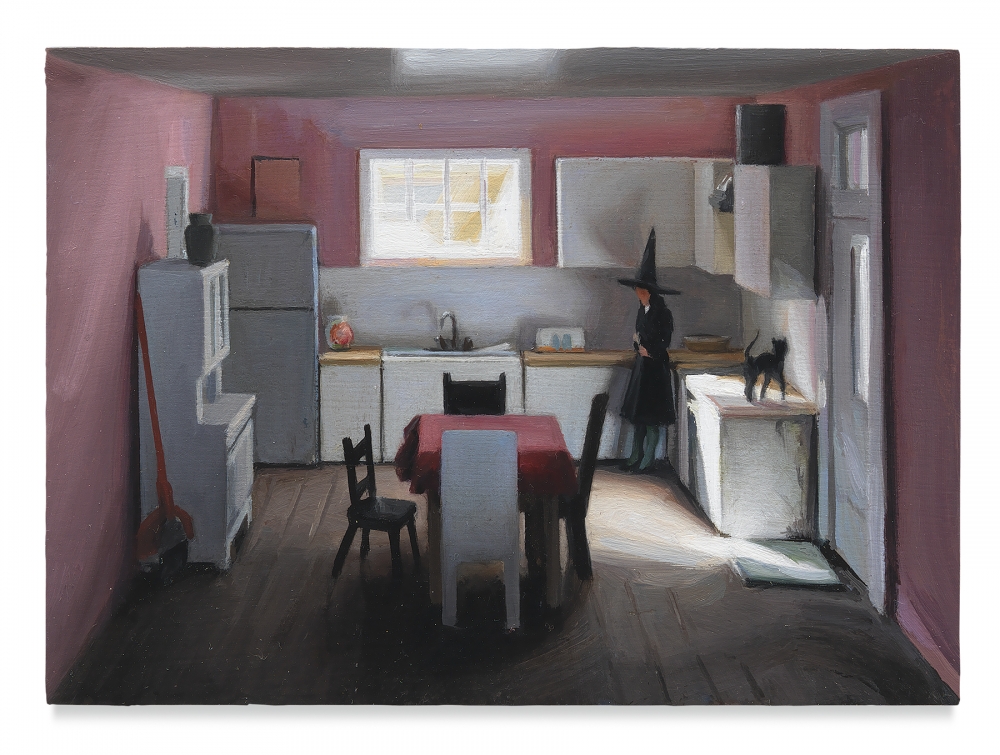 For more than a decade, Amy Bennett has been building a loyal following for her highly detailed views of a fictional world that resembles our own. She is an observational painter who works from models that she painstakingly constructs. For one group of paintings, Bennett transformed an 8-foot-square of Styrofoam into a lush green landscape that contained more than 450 buildings set within rolling hills and valleys, complete with streams and lakes. Each of the buildings was designed, built, and painted by the artist, who then depicted this self-contained world from different angles, often from a bird’s eye view. Tending to working on a small scale, she made paintings that remained true to the miniaturized perfection of her artificial, slightly askew world. All sorts of tensions arose.

In her current exhibition, Amy Bennett: Nuclear Family, at Miles McEnery Gallery (July 11–August 16, 2019), we encounter 20 oil paintings on panels ranging from 2 ¾ by 4 ½ inches to 20 by 26 inches. While the core of the show is the underbelly of suburbia, there are enough wrinkles in the presentation to transport the viewer to a more enigmatic domain. At her best – which is often – Bennett gives us just enough tantalizing visual details to enthrall and mystify, without becoming heavy-handed. This not an easy tightrope to walk and Bennett does so with grace and aplomb.

In the nearly square “Groom” (2019), a woman is cutting a man’s hair. They are standing on a narrow strip of grass hemmed in between a small house, a back fence, and a car in the driveway. The woman’s dress and the house’s siding are pale turquoise, while the man is wearing gray pants and a brown top, which, in terms of color, links him to the back fence, driveway, and car. There is no one else in the painting. Near the front of the driveway we see two empty garbage cans, one of is upright and the other is lying on its side.

Bennett reinforces the oddity of the scene by using color to distinguish the woman and man from each other, while connecting them to their environment (woman/house and man/car). At the same time, she mixes a lot of gray into the sky and trees, imparting a corporate pallor to the painting, which makes it even weirder, especially since the scene is a synthesis of the artificial and naturalistic. Finally, there is a picket fence in need of repair extending inward from the panel’s lower left side. These factors set the focus of the scene on grooming, order, disrepair, and the elimination of waste – the various cycles of life as experienced in the suburbs.

If there is a disjuncture, it is between the loosely painted trees and the close attention the artist pays to the architecture and figures’ poses. It is almost as if the trees exist in a different world from the houses, streets, and people, and I suppose they do. But sometimes the divergence becomes too much in the areas where the brushstrokes turn into shorthand for the leafy branches.

In “Drills” (2018), which is more than twice as long as it is high, Bennett depicts an elementary school classroom as a deep, box-like space, where the students huddle together at the back of the room, while a teacher, who is seated on a desk chair and holding an illustrated book, appears to be reading to them. Just to her right, a large, green hexagonal table has been upended; lying on one edge, it becomes a kind of shield. Doesn’t the painting’s title, “Drills,” invite us to read the scene in light of the Sandy Hook Elementary School shooting in 2012, and the drills that students now routinely practice in case an “active shooter” has entered the school?

No matter how ordinary some of Bennett’s scenes initially appear, it is soon apparent that she is in touch with the fears affecting everyday suburban lives. In “Fashion Show” (2018), a blonde teenage girl wearing an orange bathing suit poses in a suburban living room, while six people – one of whom is holding a baby – sit looking at her. What the heck is going on? Is this a family objectifying its offspring or, in the case of the older adults on the far right, their grandchild? There is something undeniably creepy underway, which Bennett is able to transfer to us. Are we joining the people in the room gazing at the girl? Or are we looking at them looking at her?

One of the techniques Bennett uses – and which she likely learned from Edward Hopper – is to make the interior spaces larger than they usually are, or make the people slightly smaller than we might expect. The ceiling in the living room of “Fashion Show” is more than twice the height of the teenage girl, while the room’s length is more than seven times that of the girl’s height. This is a spacious room, which enables her to use the substantial intervals between individuals to separate them from each other. The other thing she seems to have gotten from Hopper and turned into something all her own is the raking light entering the room. She uses the shift between light and shadow to further isolate the girl from her audience.

Bennett’s work brings together two divergent strains – the pristinely constructed environments of contemporary photographers (James Casebere and Thomas Demand) with the deeply emotional realism of Edward Hopper. Even after we learn that Bennett built a model for her painting, the results transcend the source, pushing the scene into an uncanny place that invites speculation. It is as if the realism she is in touch with includes collective apprehensions and mutual feelings of isolation and loneliness. It is not the surface that interests her, but the feelings lurking below appearances. I find her meticulous attention to detail captivating, which is why I have an issue with the way she paints the trees.

Bennett will do often something unexpected and surprise this viewer, at least. In the small painting, “Problem Child” (2019) – which measures 2 ¾ by 4 ½ inches – the artist depicts an adolescent girl standing with her hands behind her back, facing the corner of a room, where she has lit a fire. Stuff is scattered all over the floor, as if the place had been ransacked, and the room is filling with smoke.

In “Witch” (2019), we see a woman in a black coat and a wide-brimmed, conical hat standing in her kitchen, in the right-hand corner, where the overhead cabinets hang above the counters. A black cat stands on the edge of the counter, its back arched, looking at her. The kitchen walls are a dusty grayish-pink. The light coming in through the window, which is set on the far wall above the sink, falls on the floor and counter, cutting the witch off from the rest of the room.

In these two paintings, Bennett moves beyond the realm of suburbs into another less definable domain. In the painting “Our Town” (2019), which, at 20 by 26 inches, is the largest in the exhibition, Bennett goes beyond everything else in the show, which is substantial.

From our bird’s eye view, we see a large white tent rising over a curved grandstand where clusters of people are seated. Red banners are flying from the eight poles that hold this giant tent in place. Twelve people are seated in three neatly arranged rows of of four white chairs in front of the tent’s spacious opening. Behind the group of seated figures, a row of 12 people approaching them, in pairs. Finally, we notice a concession stand in the distance, on the right, and three men posted around the perimeter of the tent, two of whom appear to be carrying weapons.

I don’t think I would be alone in saying that this painting brought Shirley Jackson’s brilliantly sinister short story, “The Lottery” (1948), to mind. But – and this is to Bennett’s credit – it is impossible to deduce what is going on in “Our Town.” It certainly feels the emotional opposite of its namesake, Thornton Wilder’s play, Our Town (1938), where nothing sinister or weird ever happens.

What I love about “Our Town” is that it doesn’t feel forced or obvious, and that it convinces me to believe in its imagery, even though I have no idea what is going on. It blends the benign and creepy without siding with either. You wish that Stephen King (who loves Jackson’s writings), Peter Straub, Brian Evenson, or Kelly Link would write a fiction based on this or another of Bennett’s paintings. Like them, she can evoke an alien world by bringing together divergent details.

And yet, I would not say she is a narrative artist because we don’t know what preceded or will follow the moment she details. Her use of devices associated with surrealism, such as disjunctive juxtapositions, is not overt. A woman could be standing in a small backyard of a suburban house cutting a man’s hair, with nothing else needed to convey the imagery’s strangeness. Her views are believable in some fantastic and heightened way.

No matter what we are looking at, believability is the cornerstone of Bennett’s work; this is what makes it special. Her vision of the everyday world gets under your skin. You can add me to her list of fans.