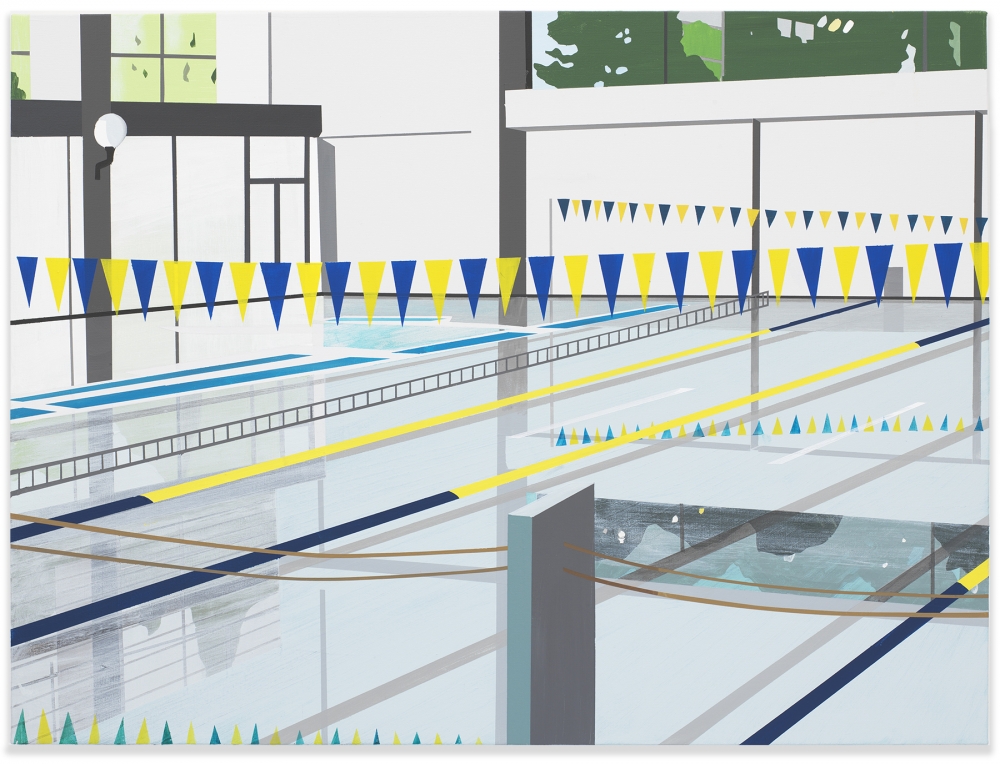 I remember the first time I saw Jo Baer’s painting ‘H. Arcuata’. It wasn’t at a museum or gallery; it was the same kind of encounter I had with most art that hit me as an undergraduate at Penn State University. It was in a magazine. Even in print the painting knocked me out. It was so unlike any other work I had seen up until that time. It was painted three years before I was born in 1971. The stretcher was just deep enough to separate it from the depth of a normal canvas. This seemed a purposeful choice to make the painting more sculptural in its read. The muted color resonated with tones of wallpaper—the kind that surrounded me as a child in the 70’s. The painting was oddly hung as well, at a lower height than usual. Its minimal linear elements raced around the side of the canvas and played with my expectations of where paint would normally be. Most of the central area of the canvas is left empty. This gives space and air for the color on the edges to sing and seems to give them more speed and movement. I was unaware that, at the time she made the painting, Jo Baer was one of very few women who cracked the male-dominated art world. I was also unaware of just how radical these painting moves were at that moment in the history of art.

As a developing artist, be it in visual art or music or other forms of expression, finding license to make decisions and assertions is the foundation of creative development and realizing one’s own voice. Every physical and conceptual micro shift in art is made permissible through the paths laid by people willing to make untested decisions in their work. Jo Baer demonstrated this herself by stating that Rothko had “given her license to work with a format.” These revelations in seeing inspire through their bold pushing of the envelope into unchartered territory.

The minimal austerity of ‘H. Arcuata’ seemed exotic and perplexing at the time. The hand was at once present in the physicality of the object, and removed in the gesture and authorship of the paint application on the canvas. During the same period when I saw ‘H. Arcuata’, I was listening to a steady diet of Autechre, Squarepusher, Aphex Twin and other electronic musicians in the studio who seemed similarly to be removing some of the ‘hand’ from the instrumentation, and migrating to sonic explorations mediated through the computer. This music was very exciting at the time as it felt fresh, new and very much tied to the moment. What I didn’t realize until much later were the connections between this music and prior inventive sonic explorations. In 1971, the same year ‘H. Arcuata’ was painted, Philip Glass started composing ‘Music in Twelve Parts.’ I have no idea if Jo Baer was aware of his music but, to my eyes and ears, they have a very similar sensibility. Rhythmic, looping, ethereal, smooth, beautiful and seemingly slightly detached, almost authorless. At the same time, unmistakably, the creator’s work. Something was in the air.

Jo Baer’s work in the early 1970’s is by no means without a like community, but what stood out to me among the many other minimal artists of the time is that it floated. It blurred the often crisp lines of conceptualism, intent, purpose and message. It asked questions– made me ask questions– about what painting could be. It didn’t tell me so much as it lured me in with its seductive surface and tilted my expectations at the same time.

In my own work, I am endlessly infatuated with balancing between poles: yin and yang, beauty and chaos, stillness and dynamism, quiet and noise. This is the feeling I am always trying to achieve and why ‘H. Arcuata’ is such a foundational piece for me. As a young art student in college, seeing that painting made me question my expectations about what painting could and should say. To this day, I am still asking that question.

Brian Alfred is an artist based out of Brooklyn, NY. He is the host of the Sound & Vision Podcast which features conversations with artists and musicians and he teaches art at Penn State University.