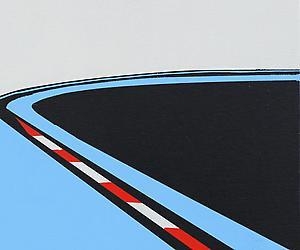 New York, New York - Ameringer | McEnery | Yohe is pleased to announce that Brian Alfred is now represented by the gallery.

In his paintings, collages, and digital animations, Brian Alfred surveys the urban landscape and the barrage of sensory stimulation that confronts the contemporary individual on a daily basis.

Particularly inspired by society’s obsession with the digital age, Alfred browses the Internet, watches a constant stream of news, scours photography, architecture, video games, cartoons, propaganda, and just about any available form of digital media to source material. Employing Adobe Illustrator and Photoshop, the artist uses his computer as an artistic tool, along with an X-ACTO blade, tape, and a ruler, to manipulate found images. He creates collages and paintings by building them up, layer by layer, with both clean, stenciled edges and loose transparent washes, to achieve a bold simplicity. He also uses the collages and digital drawings as a starting point for creating animations that he thinks of as moving paintings.

Understanding that a face or a building can be emblematic of much more, Alfred employs culturally relevant visual cues to propose the amorphous environment of contemporary culture. He cites everything from Exxon signs and celebrity faces to the sprawl of a city or a collection of wires and abandoned computers. Invoking an unsettling mixture of paranoia, danger, beauty, devastation, progress, and defeat in this post-industrial landscape, Alfred renders the ambiguous nature of the modern world.