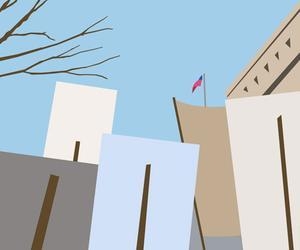 Three or four times a year, the planet Mercury appears to move backward in its orbit when seen from Earth. This optical illusion is referred to as Mercury retrograde. In popular astrology, Mercury retrograde marks intense periods when things go awry, signaling the need for reflection and revision of our lives. This is a time for veering away from the past and taking cautious steps forward. Mercury’s cycle has been speculated as the cause of major course corrections for society; it gives us a chance to grow as humans, to raise critical awareness, and possibly make a movement towards radical change.

The exhibition Mercury Retrograde: Animated Realities features an international selection of artists making animated videos that focus on uncertain future. Appropriating popular culture images from television, film, web, newspaper, tabloid, and fashion magazines, the artists manipulate source materials with a variety of aesthetic approaches and montage techniques that offer reflections upon our mass media-saturated cultures. The materiality of animation allows for flattening, collaging, reduction and abstraction of the appropriated material that at once allows the absurdity of contemporary life to stand more singularly and clearly. The works collectively vibrate with an omnipresent feeling of anxiety, a kind of anxious energy that demands we consider the current paths and policies we have allowed to be chosen for us. The animations grapple with complex topics surrounding the culture of spectacle, excesses of consumption, economy and power relations in the era of globalization and interconnectedness, and reveal the artists’ simultaneous fascination with and critique of our culture, society, and politics.

In the empty desk-scapes of Brian Alfred’s Conspiracy (2005), an unknown centralized intelligence control center collects and transmits coordinates in spite of their absent human counterparts. Streaming data marches on through airwaves while headsets make announcements in an air traffic control tower, but what precisely is the business at hand in this automated vigil? Surveillance is the shot heard around the world today; it is quite literally a ubiquitous matrix of corporate and government efforts that encircle the globe as recent WikiLeaks documents have proven. Panning past an endless succession of monitors, the pivot and spin of an office chair moves us unknown distances as urban skylines and aerial shots of rural landscapes come into monitor frame. Alfred’s flatly rendered depictions of places assert an uncanny feeling; everything seems familiar, allowing viewers just enough space to find their own déjà vu. Occasionally, we are given precise narrative moments when maps come into focus, shaky footage of nuclear signage suggests ecological danger, or the American flag comes into frame to contextualize a large group of protest signs that mechanically rise and fall. This psychological video portrait of the USA, produced nine years ago, seems almost prophetic considering how quickly Alfred pinpoints current American national preoccupations by simply removing the human figure and laying bare the activities that keep us awake at night.