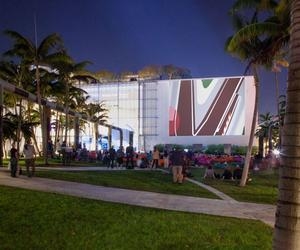 Brian Alfred, assistant professor of art, will exhibit his new animation "Under Thunder And Florescent Lights" on the 7,000-square-foot outdoor projection wall of the Frank Gehry-designed New World Center as part of Art Basel, in Miami Beach, Florida, Dec. 4 to 7. Art Basel stages the world's premier modern and contemporary art shows annually in Basel, Switzerland; Miami Beach; and Hong Kong. This is the second consecutive year Alfred has been selected for the Art Basel Miami Film program.

Under Thunder And Florescent Lights," which was scored in collaboration with the artist and the band Storm & Stress, is in line with Alfred’s current work, which has themes of auto racing, globalism, transportation and speed as a starting point. Alfred will also be exhibiting work at the fair with his galleries Ameringer/McEnery/Yohe and SCAI the Bathhouse Japan.

Alfred received his bachelor of fine arts degree from Penn State and his master of fine arts degree from Yale University. He also attended the Skowhegan School of Sculpture and Painting in Maine. He has shown in museum exhibitions internationally. His animation “Help Me” was featured on the Times Square NBC Astrovision screen as part of Creative Time's 59th Minute. A documentary about Alfred, called "ArtFlick 001," was featured at the Sundance Film Festival. His awards include the Joan Mitchell Foundation Award, the American Academy of Arts and Letters Purchase Award, the Penn State Alumni Achievement Award and College of Arts and Architecture Alumni Award, the New York Foundation of the Arts Inspiration Award and a two-time Pollock-Krasner Foundation Grant recipient. Recent film festivals also include Art Basel Film Hong Kong and Art Cologne Film as well as a screening at Salon 94.

Founded by gallerists in 1970, Art Basel has been a driving force in supporting the role that galleries play in the nurturing of artists, and the development and promotion of visual arts.