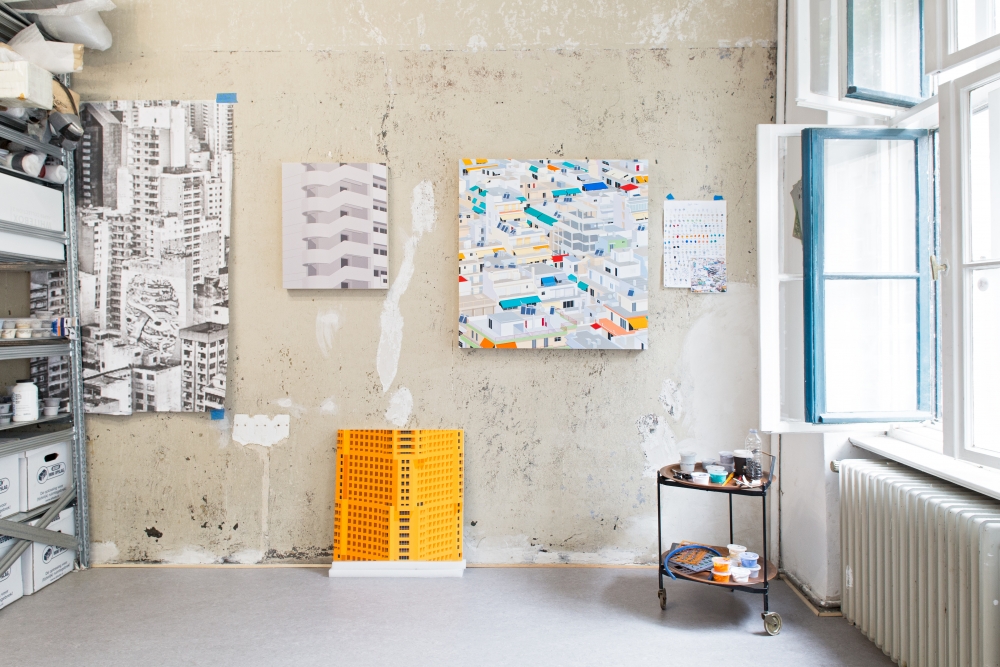 Painting man made edifices and urban landscapes, Daniel Rich uses geometric patterns and vibrant color to invest the picture with a bigger capital of invisibly political intentions. With a background in graffiti art, skateboarding and influenced by his growing up in Germany, Rich shares his unique perspective of the built environment and invites viewers to question their own. Rich paints from photographs, tracing and scoring each line with a blade before painting in the shapes. The effect is an overwhelming precision of line and perspective that appears at once tactile and flat.

As Rich expresses, “I translate photographs into paintings that call attention to implicit political and social narratives transcribed in the built environment. The architectural image is represented in my work to introduce a dialogue about changing political power structures, failed utopias, the impacts of ideological struggles, war and natural upheavals. I am interested in the highly symbolic role architecture plays in politics and its power to function as an icon of our lived experience, a portrait of an existential phenomenology whose features manifest where society is at one particular moment in history.”

DANIEL RICH (b. 1977 in Ulm, Germany) received his Bachelor of Fine Art degree in 2001 at the Atlanta College of Art in Atlanta, GA. He received his Master of Fine Art degree in 2004 at Tufts University in Medford, MA and the School of the Museum of Fine Arts in Boston, MA, where he was a Graduate Fellow. He also received a full fellowship at the Skowhegan School of Painting and Sculpture in Skowhegan, ME, where he studied in 2004. Rich was named NYFA Painting Fellow by the New York Foundation for the Arts in 2012 and recived the Travelling Scholars Grant from the Museum of Fine Arts, Boston, MA, in 2015.