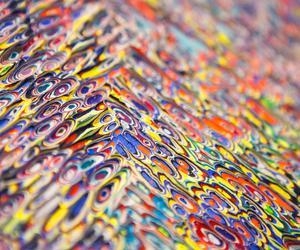 Royale Projects is proud to present a solo exhibition of new works by Los Angeles artist David Allan Peters from 22 January to 31 March 2017. There will be an open house from 12 to 5 pm on Sunday, 22 January 2017.

David Allan Peters layers countless sheathes of solid colors which he then carves into, leaving small craters that bring into view the stratified sub-surfaces. In some cases he creates deceptively simple, minimal works with a vigorously sanded final application in white, silver or black. These pieces are then carefully excavated to expose little implosions of color. Other pieces contain a baroque-like energy of hundreds and hundreds of tiny cuts. These works, at first, give the impression of a frenetic, expressionistic approach, but upon deeper consideration, his rigorous and painstaking practice in precision and perfection is revealed. As Peters forms his pieces, the boundary between sculpture and painting is examined and dissolved as he recognizes potential in the by-products of each successive step. Discarded paint is then incorporated back into the pieces or amassed into amorphous sculptures that imply crystal- like compositions, once again alluding to the passage of time.