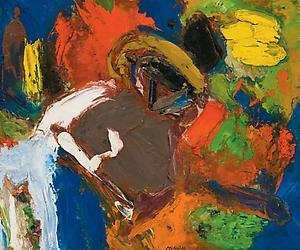 NEW YORK An exhibition of work by the under-known New York School painter George McNeil (1908–1995) is always a cause for celebration. This one was of particular interest, centering as it did on a group of canvases made between 1960 and 1968, when McNeil began to introduce figural elements into his abstract compositions.

A contemporary of Jackson Pollock, McNeil was less famous than some of his Abstract Expressionist peers, and became even less so as the decades passed. He had a long and respectable career, nevertheless. In the 1930s, after studying with Jan Matulka and Hans Hofmann, McNeil cofounded the American Abstract Artists group. In the early 1950s, he was among Charles Egan Gallery’s original stable of artists, which also included Willem de Kooning—who was a fan—and Franz Kline. McNeil’s paintings from this time resemble satellite images, with fat, snaking lines like rivers or roadways enclosing heavily worked areas of color. By the 1960s, these topographies gave way first to discrete central forms and then to abstracted human figures.

This progression can be clearly seen in the five large paintings that opened the exhibition. Two, from the beginning of the 1960s, ring changes on the same palette of stormy grays, rich browns and dull oranges. They recall Richard Diebenkorn’s “Berkeley” series of the early 1950s (perhaps not accidentally—McNeil had a stint teaching at UC Berkeley in 1956–57), not only in the way their interlocking forms divide the canvas but in their promise of figuration to come. More suggestive of a human presence, although still entirely abstract, is Lenox (1960), a work executed in hot reds and steely blues whose central efflorescence of bulbous shapes conjures one of Picasso’s extravagantly behatted women. In the second half of the decade, legible body parts begin to appear, as in Game II (1968), a field of patchy chartreuse bisected by an elongated leg with a daintily pointed foot.

The show also included a group of the small, nonrepresentational “ab- stractscapes” that McNeil made from the mid-to late 1960s, often en plein air. Pileups of swipes and smears of acid-tinged ochers, dead blues, odd neutrals and straight-from-the-tube reds and greens, they showcase McNeil’s talents as a colorist. Here, McNeil ap- pears to delight in confusing subject and ground, up and down, macro and micro. The semicircular piece of ceru- lean at the lower edge of Landscape 6/23/69 (1969) might be a puddle or an inlet, or even a piece of sky. In the woodsy-looking Landscape Motif 5/3/68 (1968), isolated elements—a froth of scumbled blue and white, patches of autumnal color and rocklike forms—are pushed gently together on a depthless picture plane in the manner of John Marin.

Late in life, McNeil garnered long-overdue attention for boisterous compositions depicting disco dances and street scenes that were seen to have affinities to the work of younger neo-Expressionists such as Jean-Michel Basquiat. But this exhibition suggested that McNeil’s paintings of the 1960s, ambiguous and awkward, might turn out to be his most enduring. -- Anne Doran