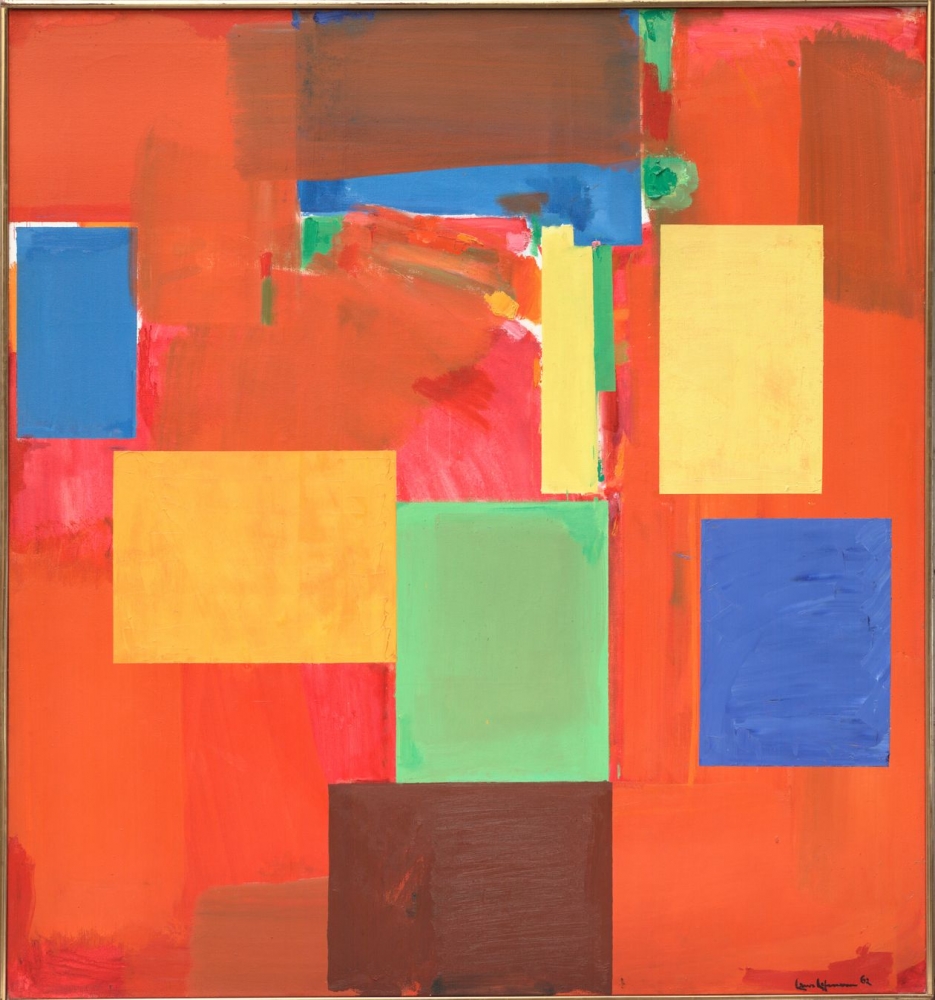 A few years ago, after a Tina Dickey lecture on the German-born American abstract painter Hans Hofmann (1880-1966), an audience member said: “I understand the ‘push,’ but I don’t understand the ‘pull.’” He was referring to Hofmann’s oft-quoted statement about the nature and dynamics of pictorial space in painting. Hofmann—who was not only a renowned painter but also the influential teacher of some of America’s most celebrated midcentury artists—coined the term “push and pull,” which he also referred to as “movement and countermovement” and “plasticity.”

These terms, discussed in his 1948 treatise “A Search for the Real in the Visual Arts,” were Hofmann’s way of acknowledging the elasticity, pliability and paradoxical nature, the “expanding and contracting forces,” of pictorial space—the constantly changing interplay and tension between flatness and depth in a painting or drawing. Hofmann understood that a picture had to be able to breathe and pulsate, to “push and pull” your eyes near and far, in space. A painting couldn’t merely refer to the world outside the picture; it required rhythm, movement, muscle and autonomy—an independent life force. Otherwise, it was inert, dead.

That Hofmann audience member could accept that a diagonal in a painting, for instance, could “pull” you deep into space, but he was less convinced about a picture’s ability to “push” you back to the front plane of the canvas. If I could, I would send him to “Hans Hofmann: The Nature of Abstraction,” at Salem’s Peabody Essex Museum.

Though overproduced with too many distractions (including sound effects, interactive screens and a colored light show), this beautiful, welcome survey is the most comprehensive presentation yet of Hofmann. Co-curated by Lydia Gordon, PEM’s associate curator for exhibitions and research, and Lucinda Barnes, curator emerita at the Berkeley Art Museum and Pacific Film Archive, where the show originated, it is also a fantastic teaching exhibition about the nature of abstract painting—an object lesson from a master.

In Europe, Hofmann befriended Henri Matisse, Pablo Picasso, Georges Braque, Vasily Kandinsky and Robert and Sonia Delaunay. He was a founder of Abstract Expressionism and the single most important voice in America for the modern European movements Post-Impressionism, Symbolism, Fauvism, Cubism, Futurism, Constructivism and abstraction. Without his painting and teaching, there might not have been a New York School—and, therefore, a shift of cultural power during the mid-20th century to New York from Paris.

The retrospective, with 43 oils and four watercolor and gouache paintings on paper, spans about 1920 to 1965. Emphasizing Hofmann’s various approaches to painting, as opposed to some forced sense of sequential evolution, it is not chronological. This refreshing, unorthodox organization is both freeing and at times disorienting. But it immediately throws viewers into the physicality of Hofmann’s dynamic and expressive color.

It opens with “The Garden” (1956), a meaty abstract painting built up mainly of small, thick primary-colored patches applied with a palette knife. Pushing to the front plane, like an advancing, spinning, tessellating wall, it immerses us in the spatial momentum and visceral pleasures of paint. Other nearby paintings, somewhere between representation and abstraction, are more landscape-based, recalling the influence of Kandinsky’s free line and heightened color in his own transitional abstractions. Hofmann’s gorgeously fluid “[Landscape]” (c. 1942) and “Landscape (Landscape No. 100)” (1942), like staring into psychedelic fire, are harbingers of Color Field painting.

Other paintings are based on the genres of still life and interior. The watercolor “Untitled” (c. 1920s) recalls Paul Cézanne and Matisse. “Apples” (c. 1934), tightly packed, suggests the claustrophobically dense surfaces of Édouard Vuillard. The abstract-leaning “Untitled (Interior Composition)” (1935) depicts a studio interior with a painting of an interior on an easel. A painting within a painting, it opens magically, reminding us of the wondrous artifice of picture making. And in other works, Hofmann quotes or combines elements of Picasso, Joan Miró, Raoul Dufy, Piet Mondrian and Vincent van Gogh. In “The Wind” (1942), Hofmann’s linear strokes illuminate like sparklers in a night sky, presaging his friend Jackson Pollock’s “Cathedral” (1947) and “The Deep” (1953).

Yet it is in his best abstract paintings of the 1950s and 1960s that Hofmann finds his true voice. And what a full and robust voice it is. In the juicy, jewel-like paintings “Morning Mist” (1958), “Sanctum Sanctorum (Holy of Holies—Holy Place)” (1962) and “The Castle” (1965), colored rectangles and ground hover between opaque and fluid, near and far, atmosphere and volume—all shining and pulsing within the plane. The pictures feel alive, becoming, evolving, working out their own fates. In these and other mature paintings, Hofmann explores color, form and space—“push and pull”—as living elements and forces, bodily experiences worthy of devotion.

—Mr. Esplund, the author of “The Art of Looking: How to Read Modern and Contemporary Art” (Basic Books), writes about art for the Journal.