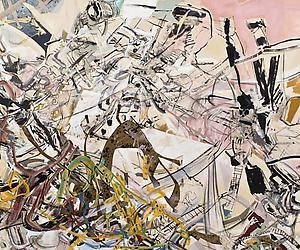 Once inside a painting by Iva Gueorguieva, it's hard to leave. It's hard to want to leave. The surfaces, colors, shapes all clamor for attention, whisking the eye on a brisk, pinball course in disparate directions, then granting it moments of reprieve, small sanctuaries of brooding beauty.

This is 21st century action painting, cousin to last century's version in its physicality, its conflation of internal and external realities and its scale. The largest - and best - works in Gueorguieva's show at Susanne Vielmetter exceed and envelop you. At more than 70 inches high and 100 inches wide, they literally position you within them by occupying your entire field of vision, the optical equivalent of surround sound.

Gueorguieva's new paintings extrapolate from the landscape and offer fewer recognizable toeholds than earlier works. A child-like sketch of a boat floats near the top of one canvas, not far from something that might be a light bulb. Curves and bulges could imply the human body but not necessarily. All that can be generalized about these paintings is their restless vitality. Inheritors of the visual legacy of Italian Futurism and cousins to the whirling urbanism of Julie Mehretu, they manifest the momentum of relentless change.

Flux became Gueorguieva's default characterization of the world's workings when the Communist regime in her native Bulgaria collapsed in 1989. She was a teenager, already studying art, and her foundation, deeply rocked, has never fully stilled.

There's a perpetual suddenness to most of her work, an urgency, speed and intensity. Directional focus seem to be at play everywhere, in dry-brushed lines, stuttering rowers of painted marks and collaged strips of dyed muslin. Solidity splinters and casts its pieces outward, indicating destruction in some pieces, but conveying a kind of exaltation in others.

The palette of "Land Through Shoulders" suggests a cataclysmic aftermath. A blood red puddle soaks one portion of the canvas, next to a shock of fragments that appear to be hurtling through space with explosive might. "Land Sun Drenched" is comparably adrenaline-charged but almost celebratory, more day-light than shadow. The composition evokes an aerial view of the "Recoiling Earth," as the show as a whole is called.

Puzzle pieces of olive, mustard, mint and coral nest together in provisional unity, some passages opaque, others dilute, quick lines racing across them all.

Gueorguieva, who lives and works in L.A., also shows two sculptures, constructed of the same basic formal ingredients as the paintings - wood, fabric, pigment and paper, all fragmented - but markedly more static. They feel more like residual traces than dynamic engines, like the debris washed up by the paintings' churning, propulsive motion.

Paradoxically, the sculptures occupy and charge their space less convincingly than the two-dimensional works. Gueorguieva's marks exert an outward pressure that her stretched and framed canvases seem to resist and barely contain, turning each painting into a map of the ever-combustible moment.