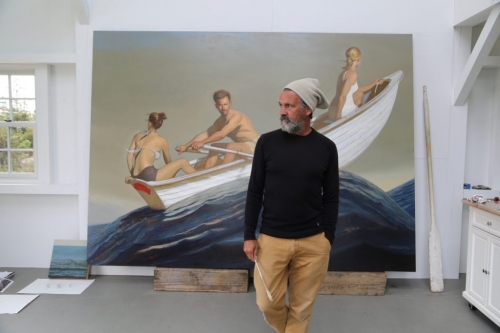 Growing up in Columbus, Georgia, Bo Bartlett did what was expected of him every Sunday. He listened intently to the preacher, prayed hard and committed those weekly lessons in morality and righteousness to the deep recesses of his dutiful mind. He was a good son, and his Sunday routine at the Baptist church was pure joy.

The preacher’s words made him feel equal parts fear and wonder. He was enraptured. When the services ended, Bartlett returned to his rural home with his parents and drew pictures of what he heard. “I would draw the stories being told by the preacher,” he said. “It might have been Noah’s Ark or Jonah’s story. Whatever it was, I would draw what they were saying.”

For many years, Bartlett assumed he would become a preacher himself. But being a teenager in rural Georgia planted other seeds in the young man’s mind. As soon as he could, he found a way out. “There were too many things I needed to do,” said Bartlett, who spends half his year on a private island far off the Maine coast, where he makes epic, biblical and biographical paintings.

And now, finally, Bartlett has gone home again. Last week, Columbus State University in his hometown opened the Bo Bartlett Center, an 18,000-square-foot exhibition space and learning center dedicated to American realism. Housed in a converted textile mill, the center features many of Bartlett’s epochal paintings, as well as the work of the artists who have influenced him, including many from Maine.

In its mission and scope, it’s similar to the Paul J. Schupf Wing for the Works of Alex Katz at the Colby College Museum of Art in Waterville, which was built to feature the work of Katz. Aesthetically, it appears to take some lessons from the new Center for Maine Contemporary Art in Rockland, just down the street from Bartlett’s Maine gallery, Dowling Walsh. The new Bartlett center is large and spacious, with lofted ceilings that filter natural light, and a modern, contemporary feel. The space is well-suited for Bartlett’s wall-sized canvases.

The $6.5 million center caps a decade-long effort by the university to bolster its fine-arts offerings and brings attention to an artist with a national audience whose work has always been treated lukewarmly by art critics. His critical acclaim has always been more critical than acclaim. In that, he shares an uncommon bond with his late friend and mentor, Andrew Wyeth, who drew Bartlett to Maine more than 25 years ago. Like Wyeth, Bartlett, now 62, may not get his first good review until he dies.

The center, which opened on Thursday, celebrates a local hero who chose to come home and presents Bartlett as an important contemporary painter working in a grandiose tradition championed a century ago by George Bellows, Robert Henri and, to a lesser degree, Edward Hopper. The university hopes Bartlett’s reputation will help make the art center that bears his name a destination for American realism in the Southeast.

Growing up in Columbus, Bartlett’s exposure to art amounted to flipping through magazines. “If you were not on the cover of Life or Look or the Saturday Evening Post – if you were not Norman Rockwell or Andrew Wyeth or Pablo Picasso – I didn’t know who you were,” he said in a phone interview from his Georgia home.

Another influence was novelist Chaim Potok, author of “The Chosen,” most famously, and also of “My Name Is Asher Lev,” a novel about a loner Jewish kid whose interest in art and image-making creates conflict in his family and community. When Bartlett read that book in high school, he knew there was a message in there for him. He needed to break away from the expectations of who and what he was supposed to be and find his own identity, even if it meant stepping away from his heritage.

“There were parallels,” he said. “I was trying to come to terms with my strong Southern Baptist heritage and the dos and don’ts. I just thought, ‘I am going to do what Asher did,’ and I went off to study in Florence.”

There, he learned to draw, expanding on the sermon-inspired lessons of his youth and filling his pages with classical precision and larger-world presence. He began believing in himself as an artist and trusting his vision of the world. When he returned to the United States, he moved to Philadelphia in search of Andrew Wyeth, whose work he admired from the magazines of his youth. There was a mystery to Wyeth’s paintings and an underlying story that Bartlett needed to probe.

It was 1975, and he found Wyeth’s phone number when he called the operator and asked for it. Wyeth answered the phone when Bartlett called and invited him out to Chadds Ford, Pennsylvania, for a visit. But when Bartlett arrived, he made the mistake of going to Wyeth’s house instead of his studio. Betsy Wyeth answered the door – and suggested the young man leave, which he did.

The next year, Bartlett enrolled at the Pennsylvania Academy of the Fine Arts. For the first time, he saw paintings by Winslow Homer, Robert Henri, Rackstraw Downes and Richard Estes. The lessons of Florence came together with his understanding of what his own art could become, and he began making paintings then as he does now, with strong narratives, magical light and bold illusions, blended over a bed of realism.

His paintings feel historical, biblical. They’re all very large, like the paintings of Katz, and many are painted from events in his life. To this day, the quality of light in Bartlett’s paintings – a clear, blue, even light that he experienced growing up in Georgia – has stayed with him. A lot of his paintings are childhood memories, executed with Rockwell Americana sensibilities.

There are references to Hiroshima, “Moby-Dick,” a lost son, friends, family and figures from literature and time. Bartlett paints like Bob Dylan writes songs: seldom with a single meaning and almost always in code.

“His paintings will mean something to some people and something else to others,” said David W. Houston, the center’s executive director. “A good realist painter is like a good musician. They’re storytellers. But given the complex times we live in, the story is never simple.”

Bartlett’s paintings tell the stories of our times and events from history through his unique lens of Southern culture and Northern exposure. His classical training and the sheer scale of his work make them feel epic and absolutely unique, Houston said.

“Bo is ambitious in his scale and subject matter,” he said. “It’s an approach to painting that you haven’t seen in realistic painting since the 19th century.”

Bartlett finally made it to Maine in 1986, when a collector offered him the use of his house at Prouts Neck, the private community in Scarborough where Homer had his studio. A few years later, he connected more properly with the Wyeths and began setting down his own roots in what would become his adopted home state and the source of some of his grandest inspiration.

In addition to painting, Bartlett also makes films, and he worked with the Wyeths on the documentary “Snow Hill: The Art and Life of Andrew Wyeth.” Betsy Wyeth produced the film, and Bartlett directed. They worked together on it for four years in the early 1990s.

One day, he and Betsy Wyeth were standing together on Benner Island looking out across the sea.

“She was naming all the islands: ‘Over there is Monhegan, over there is Teal, there is Vinalhaven.’ And there was one little tiny dot as far out as you could see. ‘That’s Matinicus. Don’t go there.’ I was so fascinated, I hired a lobsterman to take me out there. I needed to see what it was.”

He found one of Maine’s last wild places, a rough and lawless lobstering community of a few dozen families. Nothing about it was gentrified. “It was like going back into the ’40s, a very rough veneer with guns and abandoned cars and trash.”

The island has become quite progressive since, he noted, with solar power and recycling. He was attracted to its ruggedness and dirt roads.

Three years later, he purchased Wheaton Island, which creates the harbor for Matinicus, and there built his home and twin studios – his and hers – for him and his wife, the painter Betsy Eby.

Maine gave him a new world. He paints the whales that wash up on the islands and the men who carve them, heroic fishermen who pull on the oars of dories, and young girls, who repose on the rocks in the perfect afternoon sun. Bartlett paints every inch of his canvas – every pigment, every layer, every little thing – with precise intentionality.

In Rockland, Dowling Walsh is showing the painting “Christmas.” Nearly 7 feet tall and 8 feet wide, it fills an entire wall.

In the painting, Mary and Joseph pray over an empty manger. Baby Jesus rides in the backpack of a young man, who pedals away on his shiny new bike still adorned with a Christmas ribbon. The setting is the exterior of Bradley Theater in Columbus, its partially obscured marquee announcing that night’s big show: RRY CHRISTMAS.

The foreground is snow white, and the background shifts from pink to blue with the North Star twinkling overhead.

The painting may be about Bartlett’s son, who died a few years ago. But it doesn’t matter. The viewer can read it several ways, or simply appreciate its wild mercury mystery and Bartlett’s ability to create colors so distractingly beautiful they give you permission to enjoy the painting, with all its memory and fate, without needing to figure it out. Just like a song.

This one’s for sale – for $335,000, likely making it the most expensive painting in a gallery setting in Maine.

Bartlett has moved home again. He reconnected with Columbus in 2012. When not living on Wheaton Island, he lives in the house he grew up in. After leaving for Italy after high school, he’s lived in a lot of places, but, until recently, not again in Columbus.

He never felt disconnected from his Southern roots. That clear, blue Georgia light never left him. But coming home, reclaiming the house he grew up in and witnessing the opening of the arts center that celebrates his life and work are not things he imagined possible.

Coming home has completed a circle, he said, and created an arc in his life where all the parts are connected and fit naturally together.

Situated on the Chattahoochee River, Columbus today is a very different place than in the ’60s, when Bartlett knew it as a kid. It was a bit of a backwater then, no longer the textile capital that it once had been and only a shell of the city it would be.

While Bartlett was away, Columbus reinvented itself, investing in its history and culture and luring companies with a promise of prosperity and growth. Columbus State has become one of Georgia’s leading public universities and built its reputation by offering excellent fine-arts opportunities for students and the community. The Bo Bartlett Center, which is part of a larger arts complex, is important in the university’s overall strategy of presenting itself and 21st-century Columbus to the larger world, Houston, the center’s executive director, said.

In addition to showing Bartlett’s paintings and those of his mentors and others he admires, the Bo Bartlett Center will work with kids and community groups to introduce art-making experiences. It’s an opportunity Bartlett had to create for himself as a kid. “I didn’t know much about art growing up. I had to go away,” he said. “There are stories to be told from here, Southern stories, Gothic stories and stories from the black experience. We want to provide the visual tools for people to express themselves. Art opens up the world of possibilities for young minds.”

Bartlett learned that lesson in the pews of the Baptist church, listening with wonder as the preacher spun stories about far-away lands and heroic people.