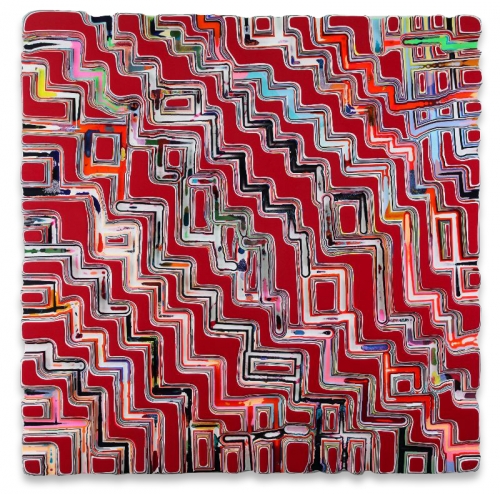 Max Estrella is pleased to present Markus Linnenbrink’s (Dortmund, 1961) most recent work under the title WHOLEWIDEWORLDWONDERFUL. This is his third exhibition at the gallery, and serves to reinforce his interest in the use of color as a code to build a narrative. Pieces from Linnenbrink’s three series, that is, Drips, Drills, and Cuts, are part of this proposal for Madrid’s audience.

In a formal aspect, the exhibition presents resin as a mediator to convey the artist’sinfinite chromatic palette. Processes of great precision and actions leaning towards performance grant immaculate finishes. Movement, which is innate to any liquid, is encapsulated capturing the moment in time when it became solid, with it.

From a conceptual standing point, the exhibition proposes a reflection on the passing of time. Positioned as if he were an archaeologist, Linnenbrink presents layers of color as time strata. Since his drip series –where colored resin covered photographs from hisfather’s archive- these pieces have portrayed the effect of the passing of time in memory. The conditions of the artist’s life, represented by the color fields, conflict with the experiences that left a mark on his father’s life, depicted by black and white images. Present time blurs that part of Linnenbrink’s life story, resulting in seemingly more pleasant memories. The new pieces of this series have left behind photographs as part of a natural process where past is completely forgotten.

Drills and Cuts series augment the role of the artist as an archaeologist. Through perforations and carving respectively, Linnenbrink reveals the layers of color and with them the time strata. Just as if it was a glimpse into the past. A kaleidoscope of memories is clearly revealed, creating a cloud of color information, especially in his Drip series. Linnenbrink also includes a large spherical sculpture. Here he incorporates everyday objects –even his daughter’s toys- which remain submerged inside the resin, connecting once again with the discourse of the passing of time. Every piece deserves a dedicated level of attention from the public in order to enjoy and immerse in the technical complexity and the romanticism of his conceptual discourse.

Markus Linnenbrink lives and works in Brooklyn, New York. He has presented solo exhibitions in the Hammer Museum of Los Angeles; the Kunstverein Gütersloh, Germany; the Markisches Museum, Witten, Germany; Museum Neue Galerie, Kassel; among others. His work is in the permanent collections of Deustche Bank and Commerzbank, Germany; Colección Olor Visual, Spain; Herzliya Museum of Art Israel; the San Francisco Museum of Modern Art; among many other institutions.