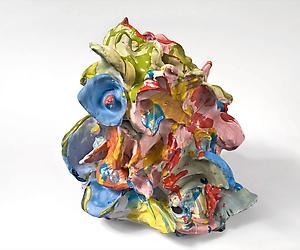 by Leah Ollman, Art in America

Ceramics are undergoing a revolution in the contemporary art world - but nowhere more so than in Los Angeles, where clay has a particularly resonant history.

Clay's Tectonic Shift": so a recent exhibition at Scripps College hailed the late '50s and '60s ceramics movement that rattled the Los Angeles art establishment. Clay had long dwelled in the shadowy margins of craft, but such practitioners as John Mason, Ken Price and, especially, the charismatic Peter Voulkos were thrusting it into the sculptural limelight. Their work and that of their students and colleagues helped change the terms of clay's production and reception, liberating ceramics from the constraints - and expectations - of domestic scale, nominal functionality and an emphasis on refined technique.

However, "tectonic," the shift didn't hold. Over time, old attitudes slid back into place, keeping work in clay largely separate and unequal in the public eye - until recently. A new shift, roughly a decade old, has been catalyzed not by a single or even a few strong personalities, but by a broader redefinition and realignment of artistic practice. Increasingly post-disciplinary, artists roam freely among mediums, unencumbered by traditional boundaries and hierarchical divisions. Many show a renewed interest in work of the hand, which they see as an antidote to theory- and concept-driven art. A messy physicality is often their (defiant) answer to the disembodied digital; theirs is a rising constituency for authenticity, which advocates the material over the virtual. Critically acclaimed shows across the country have focused attention on the vigor and diversity of new sculpture in clay, and at the same time, such work has also been normalized, folded into non-medium-specific exhibition programming. Clay is back – without, of course, ever having truly gone away.

Again, L.A. has provided fertile ground for developments in ceramics. Voulkos famously upended conventional training methods in clay when, in 1954, he established an open studio program at the Los Angeles County (later Otis) Art Institute. It became a center for experimentation, attracting Mason and Price, as well as Paul Soldner, Billy Al Bengston, Jerry Rothman and others. University art departments in Southern California have been, and remain, prime incubators for ceramic artists – particularly the prolific, vigorous programs in clay at UCLA (with longtime professor Adrian Saxe) and Cal State Long Beach (headed by Tony Marsh). Otis appears to be boosting its clay offerings, and CalArts has given a ceramics class a trial run this fall, to enthusiastic student response. Scripps College in Claremont exerts its own special influence, with the longest-running annual ceramics invitational exhibition (inaugurated in 1944) in the country.