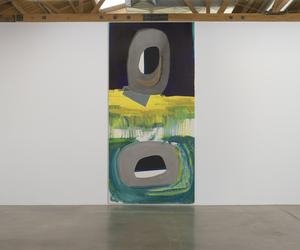 It is worth pausing, at least for a moment, to think of the differences between Monique van Genderen’s four super-large paintings in the opening gallery of Susanne Vielmetter and the paintings of the era about which van Genderen is pointedly thinking: the broad and massively scaled canvases of Abstract Expressionism. Notably, the limitations of the studio set parameters of van Genderen’s paintings. The canvases are so large that she was forced to work on them both on the floor and on the wall, not knowing what they would look like when stretched and extended at Vielmetter.

No doubt this happened often in the cramped urban environment that housed painters such as Franz Kline, Adolph Gottlieb, Helen Frankenthaler and a painter whom van Genderen specifically refers to in her press release, Morris Louis, who perhaps sacrificed his kitchen table to the service of painting in a way that no painter had before nor has since.

None of these older painters would have been too precious about discussing the studio as a constraint. We do witness such preciousness today, when the entire lifecycle of the painting itself-from conception, to execution, to sale, to postgallery life-becomes something on which artists must actively dwell.

Which leads to a conundrum, of sorts, in van Genderen’s work. For instance, Untitled (2015), a painting so large that two more centimetres would cause it to exceed the gallery wall, is one of van Genderen’s self-described Manufactured Paintings. Yes, its manufactured by an artist, but knowing van Genderen likes to think about the chain of creation of a painting, it is difficult to know what to do with the final product, which has all the flavours of a Gottlieb, with its divided surface seeming to call for primal dualities between heaven and earth, sky and water, black holes and caves. The final painting wants to be existential, to capture the viewer in the immensity of large thoughts about the size of a human in relation to an immensity.

Simply put, the conundrum is that the experience of the painting has outgrown the small discourse of the studio. Other paintings, on a smaller scale, call forth a similar reaction. A smaller Untitled (2015) measures in at only 97 x 89 cm, yet it is a painting that seems to suggest liminal states of being that recall early Barnett Newman or Mark Rothko. If the painting were called ‘break’ or ‘dawn’ or ‘onement’ or any other word that smacks of 1950s-style Expressionism, the title would fit. It is a tremendous painting, full of mystery and suspense and cosy colours sliding into intrigue, making it worthy of many viewings. The painting seems to want to believe in something old, but it hedges its bets with a language of modesty, the language of most painting in our age of doubt about painting. And, to be honest, van Genderen’s work is too good for such things.