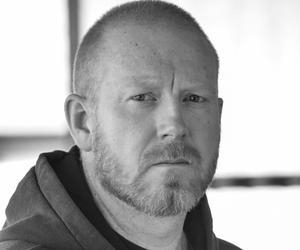 As a Hollywood special effects artist, Patrick Lee has worked on such films as "Armageddon" and "Day Before Tomorrow."

But perhaps his greatest illusion is when Lee picks up a graphite pencil and draws a face.

You can see Lee's mind-blowing photo-realistic portraits in the "Deadly Friends" exhibit now up at the Huntington Museum of Art as the internationally known and shown L.A.-based Lee is the Walter Gropius Master Artist in October.

The fortysomething Montana-born, and Minneapolis College of Art & Design educated artist speaks about his work during a free public presentation at 7 p.m. Thursday, Oct. 13.

Lee will stay up on the hill this weekend to present a three-day workshop at HMA titled "Drawing Realism" from 9 a.m. to 4 p.m. Friday through Sunday, Oct. 14-16. Visit www.hmoa.org or call 304-529-2701 for workshop fee information or to register.

An exhibit of work by Lee continues on view at the Huntington Museum of Art through Dec. 30.

Lee is internationally recognized for his exquisitely rendered graphite portrait drawings of Los Angeles gang members, an ongoing series appropriately titled, “Deadly Friends.” Lee approaches his subjects on the streets of Southern California and photographs them as studies for his drawings – a process that relies on mutual trust, honesty and relationship-building. Hand drawn and resolved over many months, the artist diligently renders muscles, pores, scars, tattoos, and facial hair in painstakingly accurate photorealistic detail.

Working to find commonalities despite our perceived differences is an incredibly important and timely exercise," said John Farley, HMA's Assistant Curator/Preparator. "Lee's graphite portrait drawings of Los Angeles gang members encourage us to look closer, beyond the often intimidating appearances projected by his subjects. His photorealistic drawings result from hours upon hours of careful observation and meticulous technical brilliance -- that much is obvious. But the underlying relationship-building and the artist's respect for the humanity of his subjects is equally rewarding. Titled 'Deadly Friends,' this exhibit offers a truly unique window into aspects of our culture that are both fascinating and fearsome."

Speaking by phone from L.A., Lee said while he became really busy in Hollywood working on films and commercials in the late 1990s and early 2000s, he would in his spare time go back to his first love of just drawing his friends in, well, not the best situations.

I am really shy so for me to approach someone is a big challenge so I started using friends of mine as source material and doing portraiture, which had never interested me, but I had gotten into the whole mixed martial arts thing when I was starting to draw again and so I would do these post fight drawings with messed up faces and then a gallery owner in town said, 'hey could you do this bigger?' " Lee said.

As it worked out when the CGI and digital take-over started taking work from Lee and similar artists who built practical effects - models and miniatures for special effects, he began turning to drawing as that one gallery show led to a New York art agent picking him up selling his stuff on the East Coast.

I absolutely love to draw and I also love to build things and photograph things so it has always been one of my things that I have been interested in was mimicking things and creating illusions," Lee said.

To find the rough-hewn subjects for his street portraits, Lee did not have to go far. He just opened his eyes, looked around and would introduce himself to guys on the streets.

At the time I was living in Hollywood it was a lot more rough and tumble," Lee said. "There were a lot of guys who would get out of jail and get off the bus and there were periods when I didn't have a car and so I was just walking around and I would see them and I would have my camera in my backpack. I initially didn't have anything to show them and so they thought I was a cop or a con, like what the hell is a stranger doing coming up to me? But I built a portfolio and in that portfolio was some of the different things I had taken on the streets and I would cut to the chase. It is initially really awkward but once you talk to them, they have street smarts and they know if you are lying or not and they realized that I was not and they did have an appreciation for drawing and tattooing whether they had it done in jail or in the real world.

Lee did his first show in 2005 predating what has become a flood of pop culture TV shows depicting life in American prisons and the impact was felt both in the art community and in L.A., where people saw other people in a new light through Lee's photorealistic work.

I think you are seeing more of it now but it is kind of rare for people to do either painted portraits or drawings of photorealistic kind of stuff - the computer and photography has taken a bit of that out, since it is not a necessity to labor over it when you can do it quicker," Lee said. "But there is some tangible experience, and you have a different perspective when you see a real painting done by hand. It just imparts a different feel. Even if it is trying to simulate a photograph or not there is something about it that makes you pause and experience it differently perhaps ubiquitously."

For Lee, the hardest thing to get right is the eyes which seem to pierce through anyone who views the portraits. He uses a mirror a lot to put the eye in reverse to make sure he is drawing it as real as he can.

Not surprisingly, Lee said his big pieces take up to two months. What is surprising is that he works he will work on five or six drawings at once. While Lee would love to create the special effect to give him "eight arms to do a new series a year" he is superstoked, as the son of two teachers, to pass on tidbits of his trained art knowledge learned both in the classroom, in the studios and on the streets.

It is a real honor and a privilege to come to Huntington," Lee said. "I love talking about art and especially with other artists and even lay people and people in the street. I am looking forward to letting people know anything I can to help them in terms of the craft and how I am able to achieve from the affects that I have learned mostly through trial and error and from other people. I know every time I start a drawing I feel like I forget how to do it and for a couple of weeks it looks like mud and I feel like I am never going to get out of this, but it is an expectation game and you keep going out and going at it and it starts to realize itself."

WHAT: Huntington Museum of Art will welcome L.A.-based artist Patrick Lee as a Walter Gropius Master Artist in October when the internationally shown and known artist speaks about his work during a free public presentation.

WHERE: The Huntington Museum of Art is located at 2033 McCoy Road, Huntington

HOW MUCH: Free and open to the public

THE EXHIBIT: Lee's mind-blowing exhibition, "Deadly Friends," is on view through Dec. 30 in the Daine Gallery.