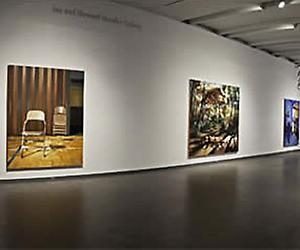 Rebecca Campbell and Angela Ellsworth both spent their childhoods in Utah and within the Church of Jesus Christ of Latter-Day Saints. Their different experiences and individual reactions to this specific context have inspired much of their mature work as artists. Multilayered and complex, their works touch on memory and nostalgia but are grounded in the present and the reinterpretation of their experiences as well as Mormon traditions and practices. This exhibition will include painting, sculpture and installations.

Rebecca Campbell (b. 1970) is known for her startling figurative paintings of children and individuals but her 2009 solo show Poltergeist included a number of large scale installations that directly drew on her childhood. She received her BFA in 1994 from the Pacific Northwest College of Art in Portland, Oregon, and her MFA in painting from UCLA in 2001. She lives and works in Los Angeles.

Angela Ellsworth (b. 1964) is an interdisciplinary artist who created compelling objects and performances. The 2010 Biennale of Sydney included the installation - Seer Bonnets: A Continuing Offense, nine bonnets pierced through with pearl-tipped corsage pins and representing the nine wives of her great-great-grandfather, who was the fifth prophet of the Mormon Church. She lives and works in Phoenix.