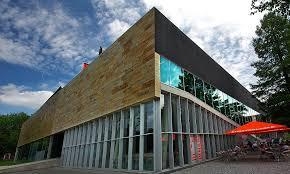 On Saturday 25 February, the Kunsthal Rotterdam is opening the exhibition ‘Hyperrealisme - 50 Years of Painting’, a unique overview of photorealistic painting. Three generations of American and European artists illustrate the history of this fascinating, figurative art movement. With this retrospective, which includes 70 works by more than 30 artists, the Kunsthal is bringing an unparalleled collection of hyperrealistic masterpieces to the Netherlands.

The work of these artists, including Chuck Close, Robert Bechtle, Richard Estes, John Salt and Franz Gertsch is painted in such minute detail and with such precision that they resemble photographs. The result, however, is more than a virtuoso copy of the subject, and the paintings create their own reality. The exhibition at the Kunsthal presents, for the first time ever, the full scope of this genre and includes all the great names associated with it, not forgetting the latest generation of artists, such as the Dutch painter Tjalf Sparnaay.

PHOTOGRAPHY AS THE SOURCE Hyperrealism - also known as photorealism - dates back to the late 1960s in America and evolved in response to the dominant trend of abstraction, minimalistic and conceptual art at the time. After the Pop Art movement, and as a result of the growing consumer society, a group of young American painters began using everyday lives and objects as the subject of their work. They used photographs as a source and reproduced existing images meticulously on canvas, from close-ups of car bumpers, shiny paintwork and dazzling chrome, colourful children’s toys and sweets, to the interiors of American diners with salt shakers and tomato ketchup bottles, and scenes of urban life: neon advertising, urban vistas and landscapes, reflections in shop windows and enormous portraits. Ever since they appeared, these paintings of everyday scenes and enlarged consumer goods have attracted much attention from admirers and critics alike. The work originally raised the question of whether it was art or simply a representation of reality, but this art movement now has a strong and enthusiastic following.

TAKE A REALLY GOOD LOOK The overview of almost 50 years of hyperrealism illustrates not only how the subject choice has changed, but also how the technology with which photorealists produce their work has changed: they first transformed images from celluloid into oil paint, and nowadays from digital pixels to acrylic paint. The sharpness of the paintings has further increased in tandem with the resolution of the photographs. It is interesting to note that the photorealistic paintings ‘force’ viewers, as it were, to take a really good look at them. The abundance of images with which we are surrounded these days means that we don’t always take the time to observe properly, and the digitisation of photography also gives rise to the question of what is real and what has been manipulated. The paintings in the exhibition ‘Hyperrealism’ go just that bit further.