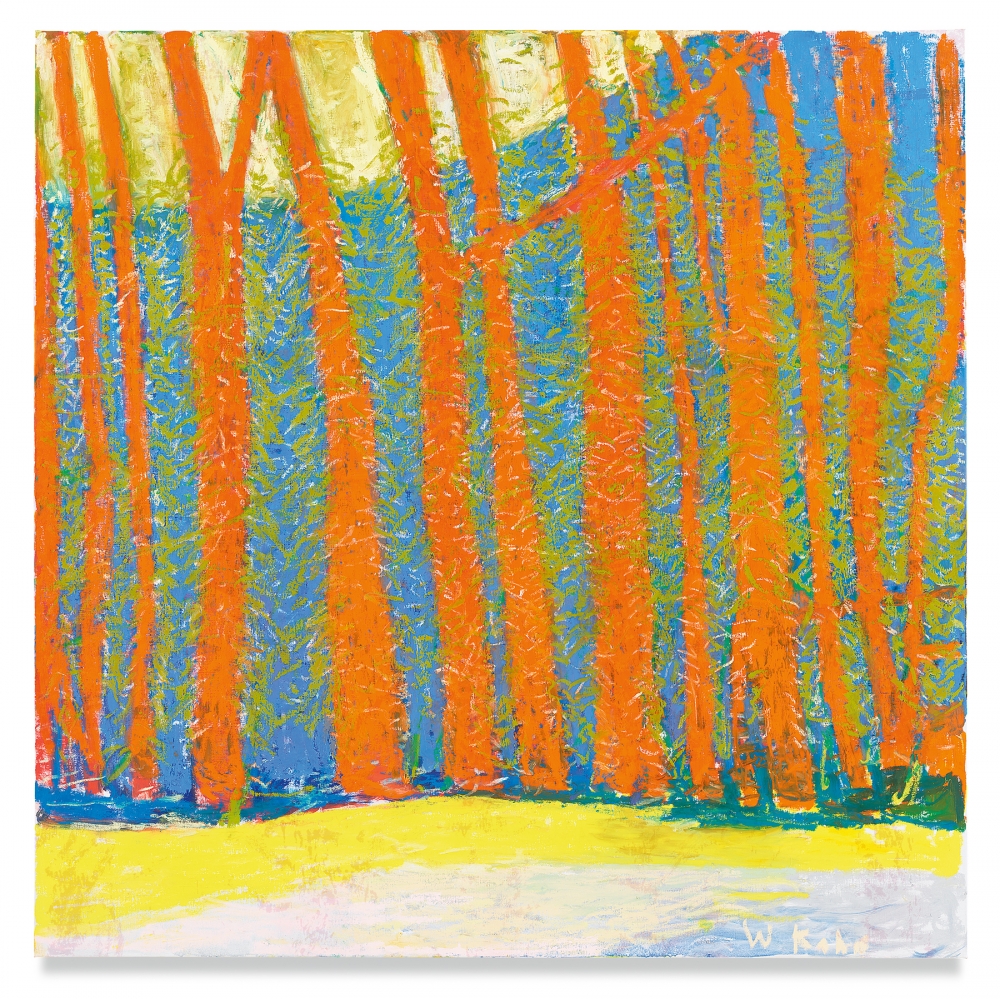 Artists, lovers, life-partners, art-world rivals, benefactors, and luminaries, Emily Mason (1932–2019) and Wolf Kahn (1927–2020) were all of these things—and more. Miles McEnery Gallery has devoted each of its two spaces to the first posthumous solo gallery exhibitions for the couple, who died within months of each other after more than sixty years of marriage. The shows offer a rare opportunity to compare and contrast the work of two very different painters—one abstract and the other figurative—who shared a passion for vibrant color, the bucolic landscapes of Vermont and Italy, and who both aimed in their works for pure, soul-baring expressivity.

Filling the larger gallery at 525 West 22nd street, some 26, mostly large major works by Kahn feature his trademark landscapes with brilliant color contrasts and lively gestural touches. Despite deteriorating eyesight and other physical ailments in his last years, Kahn managed to produce some remarkably intense compositions, such as Woodland Density (2019), which shows an imposing row of blaring orange tree trunks set against a steel-blue background. A shimmering flurry of yellow-green brushstrokes further activates the surface.

In Redwoods (2019), a dominating assortment of abstracted vermillion tree trunks pulsates against a sunny yellow background, energized with flecks of green and blue, ostensibly representing leaves. This work, and one of his last efforts, the resplendent Spring Flowering Fruit Trees (2020), a spare composition with a line of white-flowering trees glowing in a chartreuse field, are examples of Kahn’s aim to merge the attributes of Abstract Expressionism—as a former student and studio assistant of Hans Hofmann—with certain aspects of Minimalist and Color Field painting.

The connection to Color Field may be the only reliable formal link between Kahn’s work and Mason’s, which is wholly abstract. Inspired in equal measure by colors found in nature, and the poetry of Emily Dickinson, Mason refined over the years an unabashedly lyrical form of abstract painting that is inimitable and idiosyncratic. Chelsea Paintings, hung in the gallery’s smaller 520 West 21st street space, presents works from the late 1970s on, when she acquired her own studio space on West 20th Street in Manhattan after sharing a work area in Kahn’s studio for years. At the time, she boosted the scale of her paintings, the colors grew hotter, and the gestural markings became bolder than in previous works. She also began to teach at Hunter College, and established herself as an abstract painter to be reckoned with.

Surpassing Ermine (1985–86), one of the most outstanding works of the period on view, is full of tumultuous movement and ethereal light. At the top center of the canvas, three slashing brushstrokes of yellow and elongated, scumbled white lines seem to have been scratched into the deep green and purple ground. These slivers of penetrating, ethereal light illuminate the undulating waves of yellow and red in the lower portion of the canvas. The palimpsests of poured and layered pigment in The Bullock Farm (1987), another unforgettable work, serve to accentuate the composition’s underlying architectonic structure of soft-edged, irregular rectangular shapes that seem to be in the process of evaporating. In works of this period, pouring and staining techniques, plus the laws of gravity and chance, were just as important painting tools for Mason as brushes.

I worked with Mason on two monographs on her career; the first, Emily Mason: The Fifth Element (2006), took five years to produce. During that time, I got to know and appreciate her process, her passion for painting, and also her wry sense of humor. Part of my task, I realized early on in the book project, was to help her gain more confidence in her achievements. She struggled diffidently to come out from under the formidable artist shadows of her mother, the legendary modernist pioneer Alice Trumbull Mason, and her celebrated husband. We laughed about the situation a lot. I am sure she would be very pleased with the current exhibitions. The other day, though, in a midafternoon daydream I had, she whispered softly in my ear, “How come Wolf got the larger gallery?”