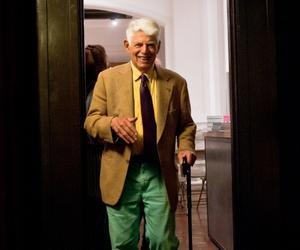 Wolf Kahn's rich, expressive body of work represents a synthesis of his modern abstract training with Hans Hofmann, the palette of Matisse, Rothko’s sweeping bands of color, and the atmospheric qualities of American Impressionism. In an essay accompanying a 2011 exhibit of Kahn's work, BMAC chief curator Mara Williams wrote, "His images are palpably about place, and yet they transcend mere description. For more than half a century, this modern master has balanced the sensuous qualities of color and light with a relatively stark geometry of form, giving free reign to complex investigations of perception and of place."

Born in Stuttgart, Germany, in 1927, Wolf Kahn emigrated to the United States by way of England in 1940. In 1945, he graduated from the High School of Music & Art in New York, after which he spent time in the Navy. Under the GI Bill, he studied with renowned teacher and Abstract Expressionist painter Hans Hofmann, later becoming Hofmann’s studio assistant. In 1950, he enrolled in the University of Chicago. He graduated in 1951 with a Bachelor of Arts degree.

Having completed his degree in only one year, Kahn was determined to become a professional artist. He and other former Hofmann students established the Hansa Gallery, a cooperative gallery where Kahn had his first solo exhibition. In 1956, he joined the Grace Borgenicht Gallery, where he exhibited regularly until 1995. Kahn has received a Fulbright Scholarship, a John Simon Guggenheim Fellowship, and an Award in Art from the Academy of Arts and Letters.

Founded in 1972, the Brattleboro Museum & Art Center presents rotating exhibits of contemporary art, complemented by lectures, artist talks, film screenings, and other public programs. The museum’s exhibits and gift shop are open Sunday, Monday, Wednesday, Thursday: 11-5; Friday: 11-7; Saturday: 10-5. Regular admission is $8 for adults, $6 for seniors, and $4 for students. Members and children under 6 are admitted free of charge. Located in historic Union Station in downtown Brattleboro, at the intersection of Main Street and Routes 119 and 142, the museum is wheelchair accessible. For more information call 802-257-0124 or visit http://www.brattleboromuseum.org.

Image: Wolf Kahn at BMAC in 2012. Photo by Kelly Fletcher. Courtesy of BMAC