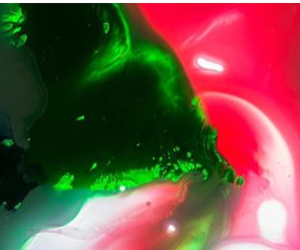 One’s initial impression of Yunhee Min’s new work, an intervention of poured paint and fluorescent light onto two long, normally transparent vitrines installed in the lobby of the Equitable Life Building—an iconic if somewhat long-in-the-tooth skyscraper in Koreatown—depended a great deal on how (or when) one first came across it. If the lights happened to be switched off (as they were at regularly timed intervals), Luminaire Delirium (Equitable Life or soft machine), 2015, displayed a milky, matte opacity, obstructing or deflecting one’s view of the vitrines’ interiors with turbulent, tainted whites, shadowed by hints of darker, more vivid colors swimming just behind. But if the cases’ hidden fluorescent tubes were set aglow, those same soured, opaque whites blazed into translucency, revealing brilliant layers of liquid color, and transforming this patch of corporate interior into a minor phantasmagoria of stained glass: Viscous, chemical yellows bled into inky blue-blacks and absinthe green; shades of red suggested a continuum between maraschino syrup and stage blood.

In previous paintings and installations, the Korean-born, Los Angeles-based artist has made use of unclaimed custom house paints, and some of the most striking hues seen here called to mind the Home Depot reject shelf. A glass panel that looked innocuous, even sunny when unlit—a bit of vernal green here, some goldenrod smudged into a meringue of dirty white—gleamed like a tortoise-shell sconce when its internal lights were switched on, becoming a backlit swirl of dungy brown marbled with moss green and chewing-tobacco spit. Min has a knack for this sort of experimentation with color, materials, and perceptual play. She also has a history of installing her work in surprising, liminal places: For “Out of Bounds (From Near and Afar),” a 2003 solo exhibition at the Yerba Buena Center for the Arts in San Francisco, she not only added polychromatic bands of color to the gallery’s steps and façade but wrapped one of the city’s public buses in them as well.

A visitor’s initial response to the exhibition probably also hinged on her degree of familiarity with the venue in which it was installed. Equitable Vitrines has, since 2014, operated as a curatorial project space periodically occupying the two long-empty vitrines of the Equitable Life Building. These glass cases have played host to four exhibitions in the past few years, occasionally accompanied by performances in the resonant, marble-floored lobby. But unlike previous artists, who played with the cases’ interiors, Min opted to fiddle with their skins, pouring enamel paint in sensuous, entangled layers onto flat glass plates whose specs precisely matched those of the vitrine’s glass panels; once dried, the painted sheets were installed in the place of the original panes, with their painted surfaces facing inward toward fluorescent tubes connected to timers that were carefully programmed so that the permutations appeared infinitely variable.  Each viewing of these works was, by design, partial and contingent on the time of one’s visit. To experience every possible permutation of Min’s light works, one would have had to camp out by the vitrines for days. During daytime hours, when the lobby receives its heaviest traffic, the timers were set to cycle through slow rhythms that subtly interacted with passersby, occasionally even arresting the ebb and flow of foot traffic within and around the building; at night they clicked on and off in even, extended durations.

The “soft machine” of the work’s subtitle was perhaps more a nod to Robert Wyatt’s prog rock group than to the William Burroughs novel from which the band took its name. Turned on, Min’s radiant panes inevitably called to mind the ecstatic projections of late-‘60s psychedelic rock son et lumière. But Equitable Life is no Swinging London: Min’s light show was served chilled, quiet, amid the low click and shuffle of foot traffic. It offered a private reverie, reliably interrupted by the inhuman switch of the timer. Min has said of her work across multiple mediums that “one [medium] is always pointing to the other,” and much the same could be said of the way she worked with color, light, and duration in this installation. There was a deictic logic to the work that addressed the viewer: Hold this image in mind and wait for that other one.