NEW YORK, NEW YORK – MILES McENERY GALLERY is pleased to announce Future Shock, an exhibition of recent paintings by Brian Alfred. The exhibition will open 1 February at 524 West 19th Street and remain on view through 10 March 2018. A public reception will be held for the artist on 1 February from 6:00 to 8:00pm. The exhibition is accompanied by a fully illustrated catalogue with essays by Ridley Howard, Sarah K. Rich, and Erik den Breejen.

“We got to stop all men from messing up the land When won’t we understand
This is our last and only chance
Everybody, it’s a future shock”

Taking its title from Alvin Toffler’s 1970 novel and Herbie Hancock’s 1983 album, Brian Alfred’s Future Shock embraces both of their messages and expands upon them. Toffler warns of an impending information overload as well as humanity’s inability to adapt to the ever-increasing speed of industry and consumerism. Alternatively, Hancock’s album welcomes the so-called information overload, praising the expansion of musical possibilities brought on by technology

Alfred embraces the duality of Toffler and Hancock, exploring how progress and development have impacted our environment and society. These paintings exhibit a certain serene beauty, while simultaneously trembling with a foreboding sense of impending doom. From the colorful zest of endless laundry hanging off of the crowded balconies of a giant apartment building, to the quiet elegance of a cropped solar panel, to the soothing repetition of greenhouse fields—each work appears benign and tranquil on the surface, but upon closer inspection contains an underbelly of danger and caution.

Though Alfred’s influences date from over thirty years ago, his works make their message as relevant and topical as ever. Seed banks, gas explosions, floods, overpopulation, smog, and technology are the subjects that press his mind, making the viewer wonder: do we panic, do we collapse? Or do we stand watching the sunset, embracing the beauty of the polluted sky? How do we deal with this future shock?

Alfred is also the host of a podcast that he created and runs called Sound & Vision, which is continually ranked among the top visual arts podcasts in iTunes. He has recorded over 85 conversations with artists and musicians since its inception almost two years ago. 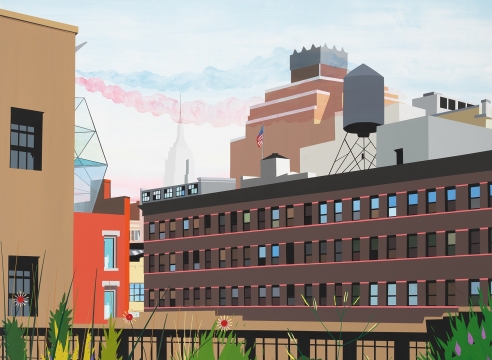 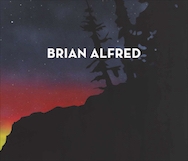 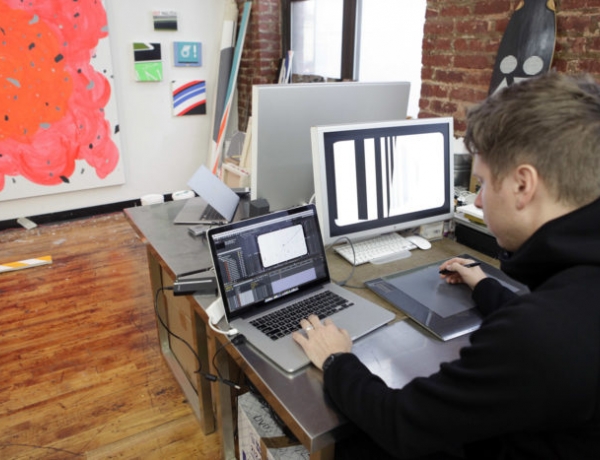 It’s another unseasonably warm winter day in New York City. Tuesday February 13th, early evening and dark out. It’ll be in the 50’s tomorrow and in the 60’s the day after. I’m trying to remember if I’ve ever experienced such a warm February in NYC. There’s an unsettling mist and fog in the air as I weave through end of the day rush hour hordes of people – many bumping into each other as they walk with illuminated faces absorbed in their handheld screens. The pedestrian crowd dissipates as I walk through Chelsea and finally step into Miles McEnery Gallery to meet up with artist Brian Alfred for a look and talk about his current one-person show of 15 paintings and one animated video projection. 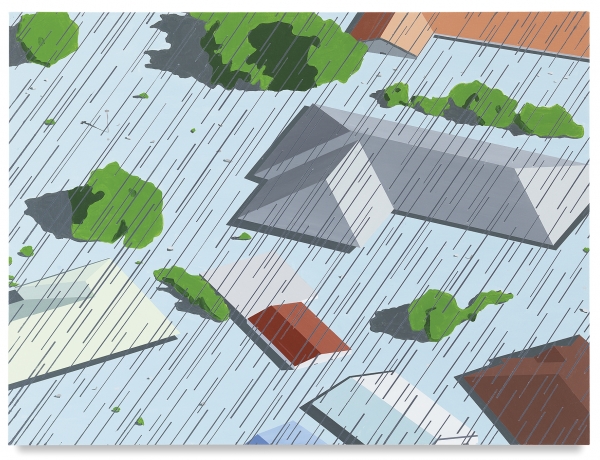 What the Gallery Says: “Taking its title from Alvin Toffler’s 1970 novel and Herbie Hancock’s 1983 album, Brian Alfred’s Future Shock embraces both of their messages and expands upon them. Toffler warns of an impending information overload as well as humanity’s inability to adapt to the ever-increasing speed of industry and consumerism. Alternatively, Hancock’s album welcomes the so-called information overload, praising the expansion of musical possibilities brought on by technology.” 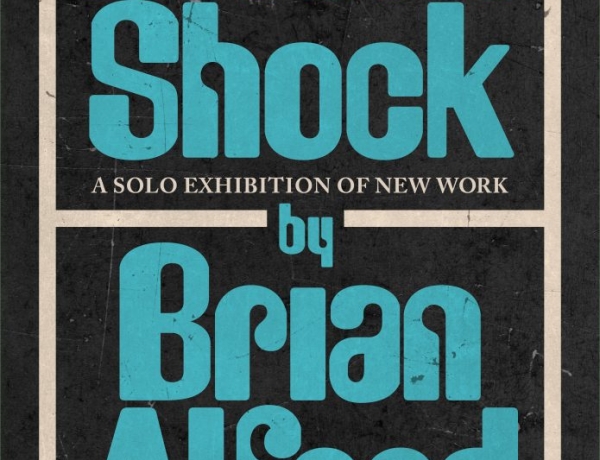 We live in a world where Instagram rules culture; where our President, instead of sending out official memos, types obscenities and presses 'tweet.' When everything you could ever need is accessible with just one click, our society's need for constant consumption has turned into the information overload. So, what do we do - embrace it or treat the fuck out? These are the questions artist Brian Alfred asks in his latest exhibition, Future Shock, at Miles McEnery Gallery in Chelsea