NEW YORK, NEW YORK – MILES MCENERY GALLERY is pleased to announce “High Rises and Double Vision: Images of New York,” a presentation of new works by Brian Alfred. The exhibition will open 5 September at 525 West 22nd Street and remain on view through 5 October 2019. A public reception will be held for the artist on 5 September from 5:30 p.m. to 7:30 p.m.. The exhibition is accompanied by a fully illustrated publication featuring an essay by Pac Pobric. Additionally, in collaboration with Grimm Artisanal Ales, Alfred’s work will be featured on the label of a new line of beer entitled “City Vision.”

Brian Alfred’s paintings celebrate everyday imagery of New York City and bring new perspective to the evolving histories of some of its greatest landmarks. By recreating iconic structures, like the Empire State Building, as well as more ordinary encounters, such as a flower shop or storefront, Alfred observes a New York that is ever-changing and developing. Taking note from renowned architect and urban planner, Le Corbusier—“New York is not a finished or completed city.”

Among Alfred’s subjects are monuments whose cultural significance and actual fruition differ: the Statue of Liberty frowns down on the city for which she serves as a beacon of hope; a subway stop entitled “West 4th Street-Washington Square” is accessible from neither West 4th Street nor Washington Square. The city is riddled with peculiar locations that deceive the eye and the mind. In this new series of works, Alfred captures the duality of New York life—appearance versus application—and examines this double vision by calling into question the sights and scenery we experience daily.

Alfred navigates these complex themes using an approach characterized by sharp lines and blocked colors. Tightly-cropped compositions manipulate the viewer’s perception of space, conflating overlapping buildings, signage, and other urban elements. These vibrant, city-shaped configurations capture ephemeral moments: the view through the gap between two skyscrapers, the contour of a passing storefront from a car window, and a downward glance into a subway entrance. While they might not last long, these unique fields of vision are fundamental parts of the experience of the city.

The exhibition at 525 West 22nd Street presents a city both grounded in history and rapidly changing. Alfred implores the viewer to see beyond its singularity. With this new body of work, Brian Alfred welcomes us to his New York.

Alfred is the host of the podcast “Sound & Vision,” which is continually ranked among the top visual arts podcasts worldwide. He has recorded over 169 conversations with artists and musicians since its inception. 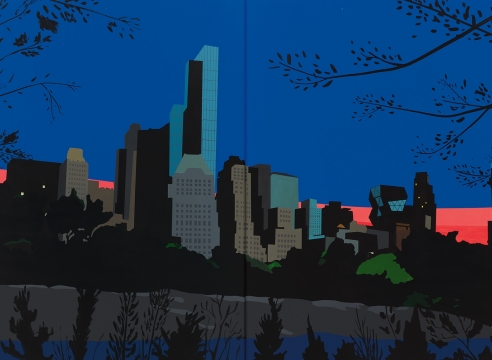